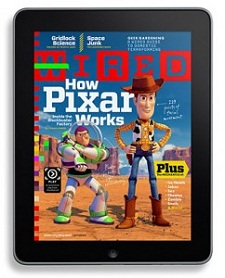 Adobe has introduced a new digital magazine format and it is aiming to make it easier for publishers to reach readers on the iPad and other tablets.

This technology is already in the wild with the Wired iPad app and it enables publishers to use rich media. For example, the technology magazine uses HD-like videos within articles that are embedded in the product and these play even without Internet connectivity. Of course, this also means that the magazines could be quite hefty, as the first issue of Wired is 527 MB.

“We aim to make our digital viewer software available to all publishers soon and plan to deliver versions that work across multiple hardware platforms,” said David Burkett, vice president and general manager, Creative Solutions at Adobe, in a prepared statement. “It’s safe to say that if you are already working in InDesign CS5, you’ll be well on your way to producing a beautiful digital version of your publication.”

When Apple first introduced the iPad, many publishers were hoping it would introduce a magazine or newspaper format similar to its iBookstore. Some were hoping a standardized format would make it much easier to develop for this platform and give the readers a consistent experiences, as some studies suggest that iPad apps in general can be confusing due to the lack of consistent user interfaces. Adobe’s digital magazine format may help fill this gap.

It’s not just the iPad though, as publishers are looking for a way to transition away from hard copies while still retaining the same narrative abilities and ad rates. We’ll soon have a plethora of tablets running Android and webOS and content creators want to reach these users. Adobe’s format also allows advertisers to utilize rich-media features like photo galleries and videos. I don’t think many get too excited about the potential of advertisers but these are sorely needed, particularly for magazine publishers. Besides, I don’t think I’d mind an in-magazine movie ad that also included a trailer.

Dell Streak Coming to UK through O2 on June 4

Dell's daring 5" tablet/smartphone hybrid will be making its debut in the UK on June 4 through O2. The Streak,...