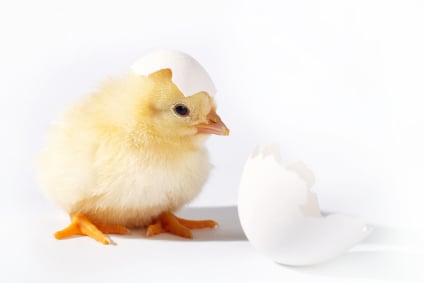 Was it the iPhone or the iPad that came first? Unlike the philosophical mobius strip that is the “chicken and egg” conundrum, we now have an answer to the question of whether it was Apple’s iPad or iPhone that came first. During an interview at the D8 conference, Apple chief Steve Jobs decided to let everyone in on “a secret.” Turns out, the iPhone wasn’t the first egg to hatch in the the Steve’s mind, it was actually the Apple tablet that served as the impetus for the iPhone.

Sure, the iPhone may have made it to market first, but that doesn’t mean it was the first idea at Apple. According to Jobs, the Cupertino-based tech company was playing around with an idea for a glass, multitouch display. Once they had prototyped the display, Apple realized that it could dive head-first into the smartphone game. That move proved quite successful.

“I’ll tell you a secret. It actually started with the tablet first,” said Jobs in the interview. “I had this idea about having a glass display, a multitouch display you could type on with your fingers. I asked our folks: could we come up with a multitouch display that we could type on? And six months later, they came back with this prototype display. And I gave it to one of our really brilliant UI guys and he called me back a few weeks later and had intertial scrolling working and I thought, ‘my God, we can build a phone with this!’ So we put the tablet on the shelf… and we went to work on the iPhone.”

It wasn’t so much that the iPad (although, at the time, the “iPad” name wasn’t yet final) sparked the iPhone. It was the technology behind Apple’s idea for a tablet device that kicked off the idea for a smartphone. Either way, Apple was working on the tablet when they stumbled on the phone idea.

What’s interesting is that Apple decided to back-burner the tablet and pursue the mobile phone idea first. It could be that the tablet market was still in its infancy all those years ago, while the smartphone market was heating up. You could even argue that Apple jumped into the already frenzied smartphone wars at its peak, only to take the battle for smartphone supremacy to the next level.

Either way, both the iPad and iPhone have proven successful in their own rights. What’s next for Apple? iPhone 4G / HD! Keep an eye on IntoMobile, as we’ll be bringing you live coverage of the Apple WWDC keynote and the iPhone unveiling on June 7th!