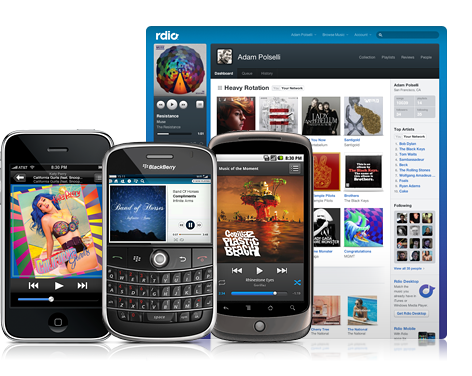 A new mobile music app and service called Rdio was just announced today, focusing on the social aspect of listening. For $9.99/month, you’ll be able to get unlimited, on-demand music on your browser, BlackBerry and iPhone, with an Android app arriving later. All three apps will have offling syncing enabled (like Slacker), so you won’t necessarily have to be in coverage to enjoy music. As far as selection goes, Rdio has deals with EMI, Warner, Sony, Universal and a few other indie labels amounting to 5 million tracks.  You can match up your iTunes or Windows Media Player libraries with Rdio, and collaborate on public playlists, which is part of the social element, but there’s a bit more to it.

Twitter and Facebook are explicitly mentioned in the press release for sharing specific tunes, but more significantly, the suggestion engine is socially-based, not necessarily just a robot chewing music through some algorithm to figure out what you like. As nice as that is, I’m worried that this system would involve either your friends being subscribers as well, or you just have to randomly pick through the network of Rdio users and find people you like. Of course, if there was an easy way to plug into friends’ existing media players without forcing them to be subscribers, that would be kind of cool.

In any case, I probably won’t be able won’t be able to enjoy Rdio, being in Canada and all, but all y’all down south can sign up for the closed beta here.

Rdio’s paid preview starts today, which you can sign up for

With the 2010 FIFA World Cup coming up fast (first matches will take place June 11th with South Africa vs....