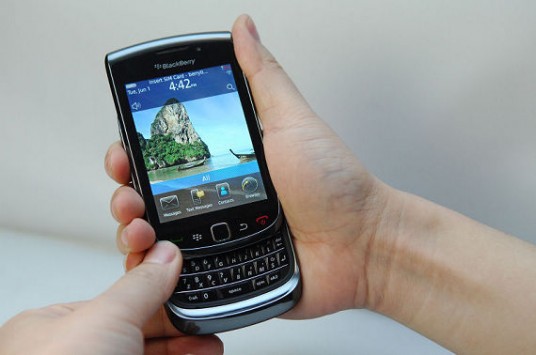 In addition to some of the nicest pictures we have seen of the BlackBerry Bold 9800 slider to date, we’ve got a lengthy review of the upcoming BlackBerry OS 6.0 on video. Your Chinese is probably about as rusty as mine, but everything seems pretty self-explanatory, and we probably don’t have to worry about this one getting taken down due to a DMCA notice.

The source confirms, yet again, that there is no SurePress, and the pictures show it’s got a T-Mobile SIM card in there, which is a slight hint at carrier availability beyond AT&T. Previous info suggests that the BlackBerry Bold 9800 will have 4 GB of on-board storage, 512 MB of RAM, have an HVGA display on par with existing BlackBerrys, and include Wi-Fi 802.11n. With that all said, let’s break down the video.

At 1:58, we can see the home screen lampshade can be pushed right down to the bottom, as well as pulled up to the top. We get a good luck at the SMS app (2:07 onwards), which seems to include options for sending pictures and assigning groups. Multitouch selecting works just fine, as on the Storm (2:48). We get a look at the Contacts app (3:12) and how long-press works for launching into actions. At 3:33, we see the Today page again, which will offer quick, at-a-glance information from messages, calendar items and the call log. At 3:58, there’s a peek at the calendar, with complete landscape support and quick shortcuts to day, week, and month views. The phone app gets a go-over at 4:24, which is more or less the same. The caller ID thumbnails in the contacts tab is a nice touch. They skip over BlackBerry Maps, which makes me think it’s not working just yet – I’m under the impression RIM’s going to try to make a respectable app that isn’t as instantaneously trumped by Google Maps for Mobile as it is now.

The Options menu is examined at 5:23, and it mostly looks like the layout has been made a bit more “user friendly”. I can’t help but be reminded of the way Windows XP reorganized the way Control Panel looked by default, and how hard it was to find what I was used to until figuring out how to revert back to the old UI.

At 5:43, we get something brand spanking new – Launch by Typing. With OS 6, you can set the physical keyboard to launch apps, which is awesome, and a long time coming. Traditionally, the keyboard was reserved for dialling shortcuts, but honestly, who makes calls anymore? Not me, that’s for sure.

The music app gets a go-ever at 6:25, which doesn’t show much of anything new other than nicer icons for individual items – even track numbers are bigger. They show us the Coverflo-style track skipping, which notifies you how many tracks you’re skipping ahead. The menu option here includes the ability to send tracks to TwitterBerry. That’s bizarre, since TwitterBerry was a third-party twitter client that has since been renamed to OpenBeak. Sure enough, it pops up again at 9:06, and it’s the old TwitterBerry app, running on OS 6.0. That’s good news for app developers worried about forwards compatibility.

At 8:19 we start looking at video app. There’s something distinctively meta about watching the initial BlackBerry OS 6 promo video on the slider. Nothing especially new there. Pictures are examined at 9:39, along with some suggestively-posed female soccer players. We see multitouch working hunky dory to zoom in.  At 10:18, we get a listen at some of the new ringtones, if you’re concerned about that kind of thing. I was never especially impressed with the native preloaded ones, but some of these new ones sound good.

Around 10:38 we finally get a good look at the Podcasts app. Last I had heard, you could only load up certain predesignated ones, but the demonstrator clearly has his pick of the litter. It looks like there’s a progress bar before you launch into an individual episode, showing you where you are when you last left off. The individual programs also have coloured circles next to them, presumably to show if they have new episodes queued to download, fresh downloads finished, episodes left to listen to, or if everything has been listened to.

Further in, the calculator, memopad, files, voice dialing, password keeper, and tasks get a brief glimpse, but not much has changed there. At 13:51, they get into a round of Brickbreaker, which looks like it got a bit of a visual upgrade. At 14:25, there’s a cryptic looking app called Auto-Answer, with the only option being a checkbox to enable or disable. The Toolkit at 14:34 is new, and looks like it’ll be the place to go to set up various services: Bluetooth, Wi-Fi, e-mail, BBM, instant messaging, social networking, as well as handle personalization, like fonts, wallpapers, ringtones, date, and language. A tool unfamiliar to me is SIM Contacts Sync, which sounds awesome – right now, you have to copy contacts one by one to your SIM card, it’ll be nice to have that finally automated. The Toolbox also has a bunch of help files, including tutorials and a glossary for the new users.

At 15:15, we get a good look at the Feeds app. The only tabs showing up are Social Feeds (for Twitter, Facebook, and the like), and RSS Feeds, both with their own respective drop-down filter option.

Hooah. There’s a lot going on there. It would have been nice to see more of the Webkit browser, but it looks like they didn’t have data service, which is probably a safe bet if they don’t want RIM nuking the device. If you’re looking for more information on BlackBerry OS 6.0, I’ve run down other video clips here and here.

With the launch of the next-generation iPhone 4G / HD looming just over the horizon there's no doubt that AT&T...