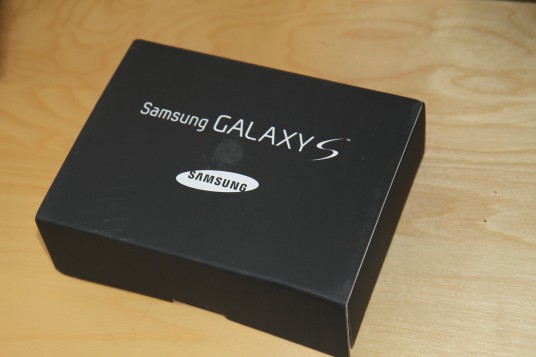 The news today may be all about the new iPhone 4, but others may be waiting out for the Samsung Galaxy S. The Galaxy S may not match Apple device in terms of screen resolution, or application count, but the sleek device has a few tricks up its sleeve. And, Samsung is telling a select few not to forget that.

The PR team over at Samsung has begun shipping out teaser boxes with none other than… A USB speaker system that looks like a mini UFO. Yep, that’s it. A message on the inside of the box simply says “Samsung Galaxy S Landing Soon” (get it? UFO, landing?).  Well, that’s exciting and disappointing all at once. We can’t get mad at the teaser box, but we can get excited for the news that the Galaxy S is certainly on its way, and soon! All signs are pointing to a T-Mobile release, but there is a variant that’s been floating around that seems to be undeniably AT&T-bound. Be damned the iPhone 4’s absolutely amazing resolution, I’ll take the Galaxy S’ Super AMOLED display any day! Not to mention its awesome graphics performance.

We recently reported that the Galaxy S would be launching in 110 countries all at once, so if the device is coming to the US soon, then the massive launch across the globe is surely to happen then as well. It may not be the most desirable Android device coming down the pipeline, but it’s still a gorgeous phone that should help any carrier get some healthy sales figures out of it. Now, as far as launch date, we’ve got no clue, but  I wouldn’t be completely surprised if it was released late this month, or in early July.

With rumors that the Galaxy S will be hitting every major carrier in the US, two of the four seems like a good start, does it not? I’m hoping that we’ll see T-Mobile get it first, because as great as the MyTouch Slide may seem to be, the smallest of the four major carriers needs a high-end Android device. For once.

Swype for Android gets updated

Swype has updated its beta client for Android and the latest version has a host of improvements that should make...