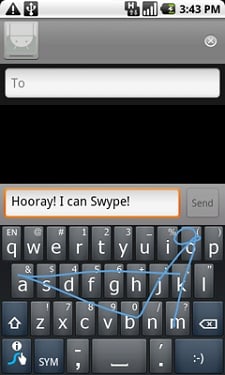 Swype has updated its beta client for Android and the latest version has a host of improvements that should make it easy to bang out messages.

If you’ve never used the keyboard-replacement app, it takes a whole new approach to text input. Created by the guy who invented T9, you trace the path of the words you want to type instead of hitting keys. Even if you don’t trace it perfectly, the software is intelligent enough to know what you mean and you can also train it to recognize your favorite words that may not be in the dictionary. There’s definitely a learning curve but I’ve found it to be an excellent way to quickly craft messages once you know what you’re doing.

The latest beta improves on the original one in multiple ways. Along with bug fixes, I appreciate that it will now insert apostrophes into contractions, as well as fix some of the spacing issues I would stumble upon. It is also supposed to offer a smoother overall performance, make the dictionary a bit smarter, as well as not save passwords into your dictionary unless you want it to.

I remember seeing these guys when they first went live a few years ago at one of the TechCrunch events and I thought it was neat technology. The company started off on a single handset, the Samsung Omnia II, but it is now on track to be on 10 million handsets by the end of the year. You know you’re on to something when you get copycats, as Nuance has also introduced a “T9 Trace” keyboard which is awfully similar to Swype’s technology. Imitation is the sincerest form of flattery, I suppose.

Don’t hold your breath if you want Swype on the iPhone, though, as the company has previously said Apple will probably not use the technology because it is licensed to other phones.

iOS 4 for iPhone 3GS Jailbroken in No Time At All

We haven't really had a chance to breathe since iOS 4 was announced at WWDC yesterday, but the new operating...