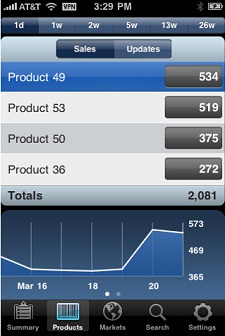 Apple is reaching out to developers by releasing the iTunes Connect Mobile app, which provides detailed statistics about the performance of programs in the App Store.

According to Apple, the app “allows developers to access their sales and trend data from iTunes Connect. You can now view your daily and weekly sales data related to updates, paid and free apps as well as in-app purchases. Whether at the office, at home or on the go, iTunes Connect Mobile keeps you informed about your sales numbers right on your iPhone or iPod touch.”

The move comes at an interesting time for Apple, as its iPhone, iPod Touch and iPad have been selling like hot cakes and the success of the App Store has been a tremendous success. During the unveiling of the iPhone 4 Monday, Steve Jobs was eager to note that the over-the-air app store has already seen 5 billion downloads and the company has paid out over $1 billion to developers. This could take off even further, as the iOS 4 potentially enables more useful apps with the use of background processing.

But Apple’s relationship with its app developers is tricky, to say the least. The company is still criticized for not being transparent enough about what will be approved and when it will happen. In fact, the developers at Appsfire have pulled its program out of the App Store because it was fed up with lack of communication from Apple. While this isn’t a huge app player, it does point to some signs of frustration with Apple.

The company also raised the ire of some developers by banning cross-platform developmental tools, including one from Adobe which compiled Flash apps into an acceptable iPhone format.

The new app should help quell some frustrations, as I’ve often heard devs complain that iTunes has been a “black hole” for data. This app should give content creators useful, up-to-date stats nearly anywhere.

How many times are we going to hear about the iPhone coming to T-Mobile USA? About five gazillion times a...