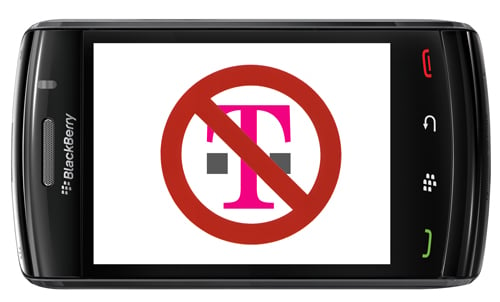 A rash of T-Mobile BlackBerry users have had the BlackBerry service on their unlocked Verizon Storm cut off rather suddenly, leading us to believe that it was a clear and conscious decision by someone. Whether it was Verizon, T-Mobile, or RIM who cut off service is anybody’s guess. With some work, a few users have been able to get data transfers working over EDGE, but the problem lies with the service books, which communicate between the carrier and RIM’s servers (where all of the e-mail action happens). The Verizon BlackBerry Storm, although primarily CDMA, also has a SIM card slot for world roaming on 2G networks. Clearly T-Mobile is interested in people buying their phones on top of their service, and have been shutting down support requests with “not our phone, not our problem”, but resorting to a cold cut-off comes as something of a rude shock.

Although it would be highly uncharacteristic of T-Mobile to do something like this, it’s par for course for Verizon, who used to lock out GPS functions so they would only work with their subscription based navigation service. It’s entirely possible that Verizon wanted to prevent defectors for T-Mobile’s big Father’s Day promo, and had a little chit-chat with RIM about it. One user claims it’s not Verizon at all, since they’re having issues on the Vodafone version,  both Verizon and Vodafone are what you might call cozy, even to the extent of pushing this decision across both carriers. We’re still waiting on a statement from T-Mobile, but don’t hold your breath. Anyone else in this position having issues?

If you want to nab an iPhone 4 on O2 UK, don't expect to get an unlimited data plan because...