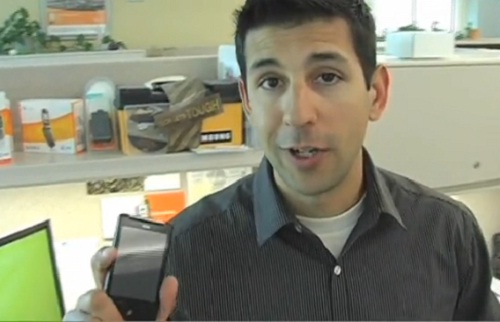 A video from AT&T’s testing labs shows off an unnamed, new Android handset and it looks an awful lot like the HTC Aria/Liberty we’ve seen before.

The second-largest carrier is kind of being a tease by showing off the handset but not giving many of the details. It’s more of a peak behind the curtain about how AT&T tests its devices before launch. There are some neat things you can gleam if you’re a real mobile fanatic though, so check out the video embedded below for more details.

As for the handset itself, it’s clear that it’s running Android and will be made by HTC. The Aria/Liberty is expected to sport a 2.5-inch or 2.8-inch screen, a 5-megapixel camera, a standard headphone jack and an optical trackpad. It’s supposed to run Android 2.1 and the video clearly shows that it will be rocking HTC’s Sense UI. There’s no word on when it will be released or how much it will cost, but it seems like a mid-range device, so don’t expect to break the bank to get it.

One thing is certain: this handset will give AT&T a much-needed boost in its Android portfolio. The company’s only significant Android device is the the Motorola Backflip and we found it to be quite a disappointment in our review.

The second-largest U.S. carrier will also be supporting the Android-powered Dell Streak next month and this is quite an interesting device. The tablet/phone sports a massive 5-inch capacitive touchscreen, which may make it a tad too big for many pockets. It also has a 5-megapixel camera, WiFi, GPS, 3G, 1 GHz processor, front-facing camera, cellular capabilities and it will run Android 1.6 but will be upgraded to 2.2 eventually.

AT&T is also pushing out the Dell Aero, but that seems like more of a favor to Dell rather than a handset that will move the needle.

Check out the full video after the jump!

While we might not get the luxury of seeing if it handles a drop test as well as the iPhone...