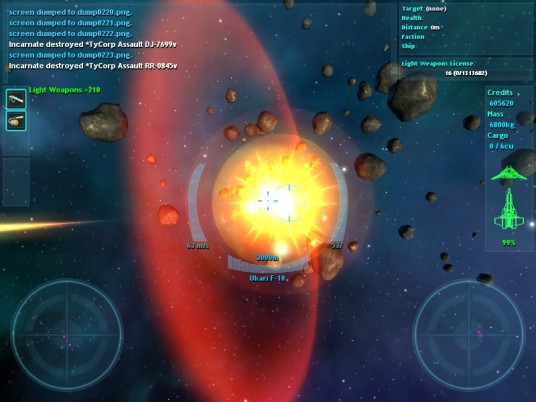 Sci-fi massively multiplayer online game Vendetta Online has announced their intent to create the first MMO for Android. At most, current MMOs (like World of Warcraft) are just offering companion apps to provide some partial in-game connectivity or to be used as a reference, but Vendetta Online is aiming to have 90% of the game content accessible with “reasonable playability”. Given, only tablet-style devices with Tegra processors will be able to support the 3D models and fast-paced space combat, the MMO will function over 2G, 3G and Wi-Fi connections. The stability of those connections are something of an x-factor – it sure would suck to be in the middle of a heated firefight and suddenly lose reception.

Android tablets still aren’t exactly widespread, but there are plenty being worked on. Huawei, Viliv, Acer, Dell, and Archos are all playing with the form factor, with other major players likely considering it. Nvidia has certainly thrown in their chips with Android, and now that game developers are making use of the hardware, we can see why. The MMO’s developers aren’t committing to the iPad just yet; they’re happy with Android as a place to experiment with the idea, and if it goes well, an iPad version may very well get done.

The game itself looks kind of cool – almost like a faster-paced EVE Online, and cheaper to boot at $9.99/month. Check out Vendetta’s website for a closer look at the game. The Android app will be showing at E3 this week, and be available sometime this year.

HTC Aria and Pantech Ease Announced by AT&T, Due June 20

On Friday AT&T showed off the HTC Aria, and today they've gone official with an announcement, alongside a cheap texter...