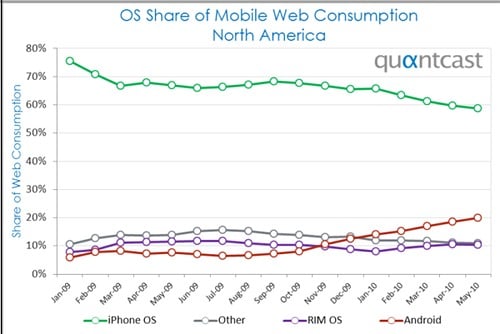 Android is definitely the mobile operating system to watch these days as its growth skyrockets and eats away at the iPhone OS, now aptly named iOS. While Android only has 20% of the mobile web consumption market share when we look at that chart above, it’s an impressive number given the fact that there are nearly just as many Android handsets out there as there are iPhones. Meanwhile, iOS has the lion’s share of the market with 58.8% as of last month. So why the discrepancy?

Let’s not forget that iOS isn’t just limited to the iPhone, but it is on the iPod touch and iPad as well. Since both devices use mobile Safari, it gets thrown into the mix as well. But what’s impressive here is where Android stands and just how quickly it has been growing. Since October 2009, it has steadily grown with no decline or even stagnancy as it nips at iOS’s heels.

With the EVO quickly selling out and demand still high, and new Android devices coming from Motorola and HTC this year, will the launch of the iPhone 4 help stave off Android’s rise? It would be nice to see the competition get more fierce than it has been, which in turn would mean better features and options for us.

Sci-fi massively multiplayer online game Vendetta Online has announced their intent to create the first MMO for Android. At most,...