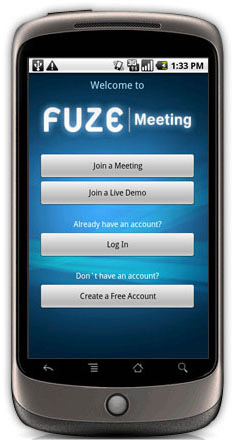 After releasing its mobile applications for the iPhone and BlackBerry users, online collaboration solutions provider Fuze Box is “going Android” with the Fuze Meeting app. Using the new application, users can collaborate on various forms of content including videos and office documents, all while on the go.

In a nutshell, Fuze Meeting for Android’s features include:

And that’s about it. To grab Fuze Meeting for your smartphone, search it in your device’s app store — i.e. Android Market (or Apple AppStore, or BlackBerry App World).

And before I let you go, I’m eager to see what or whether Apple can contribute to this “mobile meeting” space now that the iPhone 4 has a camera on it. I would imagine a cool interface, though not that many features since the iOS lacks a proper file system (until it get’s jailbroken, that is).

REVIEW: T-Mobile myTouch 3G Slide – Is this the Android you’re looking for?

T-Mobile knows that the myTouch 3G Slide is not going to out-spec other flagship devices like the Droid Incredible on...