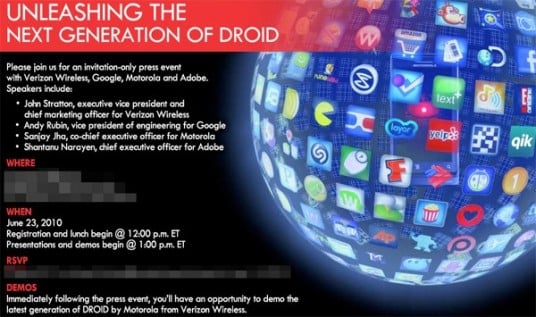 Verizon Wireless, Motorola and Google are teaming up for a press conference next week to show off the next generation of Droid smartphone. Unless something crazy happens, this should be the official introduction of the Droid X.

We’ve already seen some leaks about the Droid X and it is expected to rock a huge screen that could be up to 4.4 inches. That would give it a slight size edge over the EVO 4G and we’ve seen that the next Motorola handset looks pretty big in comparison. It should be super crisp and have the multitouch you expect from a device like this.

It’s also supposed to have a version of MotoBlur on it but this should be the next generation of the software, so don’t expect the same garbage that was on the Backflip. The camera should be boosted up to 8 megapixels and it should include 720p HD video recording. Look for an HDMI port, a 1 GHz processor, Android 2.2 (capable of Flash, that’s why Adobe’s there) and the handset should have all the other connectivity options on expects from a device of this class.

Our friends over at Engadget have already got their dirty mitts on one, check out their preview here. Those guys seemed to be pretty impressed with the Droid X but I’m sure Motorola, Google and Verizon will throw a few surprises our way during next week’s introduction.

So, it looks like we’re entering an era of really cool smartphones. Verizon fans have the HTC Incredible, AT&T has the iPhone 4, Sprint has the EVO 4G and T-Mobile should soon be getting the Samsung Galaxy S. We’ve sized up the main killer handsets of the summer in our Superphone Shootout but it looks like we may need to add a few contenders.

The new Motorola handset looks like it will be a killer device and I’m also excited about the phones we’re going to see from Dell later this year. Don’t worry Nokia fans, I think the N8 could be cool too.

Press shots of the unreleased Sony Ericsson Yendo have surfaced, bearing some prominent Walkman branding.  This phone was leaked last...