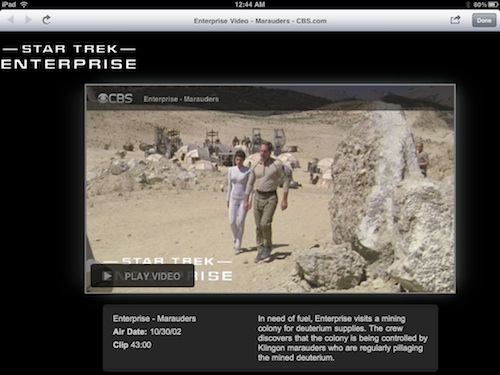 Poor Adobe Flash is still out of the Apple game, and it has been forcing content providers to jump onto the HTML5 bandwagon. With magazines like Wired already on the case, CBS is next up as it tests video and media that is iPad-friendly. CBS Interactive Senior Vice President Anthony Soohoo said last month that the company is planning on having CBS.com to be completely HTML5 friendly by the time its fall TV lineup hits.

According to mocoNews.net, who had a brief chat with Soohoo, CBS is testing its HTML5 video capabilities with Star Trek Enterprise and making sure it’s up to par with Flash delivery:

“What you see right now is a small, little experiment,” Soohoo explained,  with Star Trek Enterprise as an “ideal” subject, in part because of its fan base and because CBS owns it. “We’re currently just testing for the time being.” CBSi plans to move towards HTML5 parity with Flash video but first Soohoo and his team need to find the right mix of tools. It’s not hard to offer the video in both versions but it’s far more complicated than that.

So as things get underway, and tests appear to be going well, it appears that it’s quite a complicated process. CBS isn’t making any promises, but it wants to offer its content as both a dedicated app and a browser-based version depending on what audiences want. I get the feeling audiences are going to take all they can and want both.

Ultimately, CBS’s decision to move forward with HTML5 isn’t such a bad one. Soohoo believes that doing so opens up the ability to deliver content to other devices on several platforms, too. It’s better to get a head start in an area where companies and competitors like ABC and NBC are also vying for eyeballs and attention.

Square Enix has been giving a lot of iPhone love as of late and it looks like the iPhone lovin'...