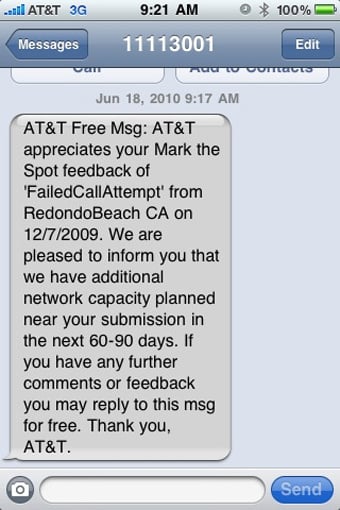 In December, AT&T released an iPhone app called Mark the Spot, which would submit poor coverage areas to AT&T for their consideration. You could report dropped, poor or failed calls, lack of coverage, or data failure, happening either once, seldom, often or always. At that point, it was easy to imagine all of that data going into a massive bottomless pit, never to be seen again, but as it turns out not only is AT&T working on the areas reported, they’re sending out text messages to update folks when they can expect improved service in the spot they reported through the app.

Over the last couple of months, AT&T has been working especially hard to improve their coverage, likely because of the impending iPhone 4 launch. They’re ranking high on speed tests, talking big about mobile broadband, and now they’re offering free Wi-Fi at Starbucks. AT&T service is still far from perfect, but all they need is something better than their previous iPhone launches, which have destroyed service quality and generally made people wish they picked up an Android phone on Verizon.

It was a clever strategy on AT&T’s part to let folks report poor coverage and let end-users establish the priorities – we can only presume AT&T will need even more help once iPhone 4 launches.

We've seen the HTC Legend quite a few times now, but never like this. The svelte, aluminum uni-bodied mid-range beast...