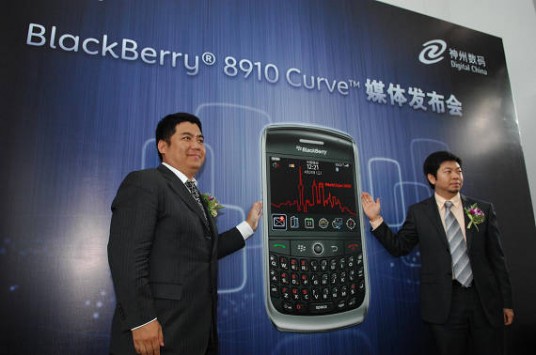 The BlackBerry Curve 8910 is a device we’ve heard relatively little about, but it’s gone official in China. There’s a bit of weirdness going on here, though – as you can see, this version has a trackball, as does another 8910 we saw in Venezuela. However, we’ve also seen two new Curves with trackpads that were also supposedly the 8910. What gives? Do we have two different phones altogether?

Looking at RIM China’s BlackBerry 8910 page, the specs look more or less the same as the original Curve 8900: 3.2 megapixel camera with autofocus and flash, 480 x 360 display, OS 5, and GPS. No 3G, and unlike the original, no Wi-Fi. There’s a weird little marking on the left side next to the convenience key, which might offer some kind of new function, but I have a feeling this model is little more than a gimped 8900 with no Wi-Fi to appease Chinese government regulations. The 8910 was supposed to use a new Evolved-EDGE standard, which squeezes even more out of 2G, but it’s nowhere to be seen in the spec sheet. We’ll have to see more of that mysterious trackpadded Curve on the chance that it got the new feature instead.

Video of the unboxing after the jump!

Although we've already heard a fair bit about it, RIM started showing off their new version of App World last...