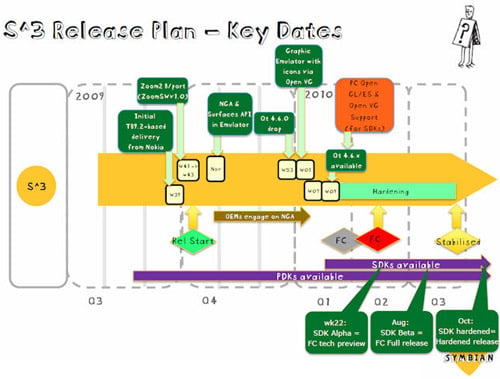 Symbian Foundation’s Senior Release Manager and Chairman of the Release Council, Mark Skrebels, said in a tweet that the Symbian^3 is now functionally complete. In other words, the mobile operating system is now ready for community use, and by community they mean OEMs, developers, operators and other members of the eco-system which are not the end users.

Now the mentioned community members are free to test and evaluate the OS, locate and propose bug fixes, and so on. This is actually the start of the so called “hardening” stage when Symbian^3 is preparing for the mass market.

It’s likely that this phase won’t take too much to complete as we know that the Nokia N8, which will be the first Symbian^3-powered smartphone, is set to hit the market later this year.

In terms of SDK releases, a technology preview (alpha) is expected later in June, while the beta version is expected in August and the hardened (full) release in October…

Less than a month ago, SPB Software released its SPB Mobile Shell for touch-enabled Symbian S60 devices. Now the company...