When it comes to first generation Android phones (Legacy phones, as Google would put it), it’s more up to the carriers to select the ones that will receive updates and which Android phones will be left in the dust. Case in point, T-Mobile has promised that the MyTouch 3G will be receiving Android 2.2 (Froyo), but it’s still unknown if the G1 will receive such an update. Sprint on the other hand is choosing to can some of their devices, and leave them with Android 2.1, according to a recent tweet. The Sprint HTC EVO 4G made the list of Android smartphones with planned updates to Android 2.2 Froyo. The Samsung Moment and HTC Hero, unfortunately, didn’t make the cut. 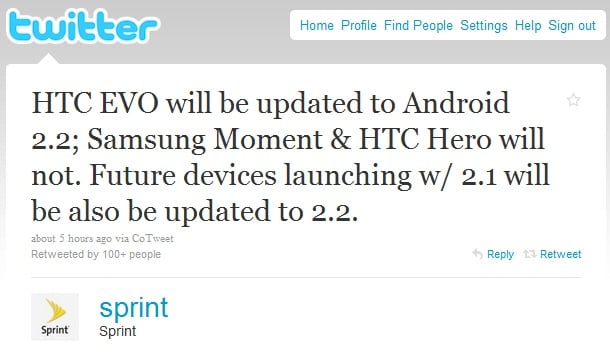 We  can obviously expect the Sprint HTC EVO 4G to receive the Froyo update, as well as the Samsung Galaxy S Pro, but the Hero and Moment are going to be left behind. Both devices are newer than some T-Mobile phones that will indeed get the Froyo update, but Sprint is choosing to send them out to pasture, and maybe that’s OK. Some users with these devices may disagree, but let’s face it, your phones aren’t at the top of the fast-growing Android heap, and it’s actually pretty hard to say that they ever were.

With this move, Sprint can now focus on the development of current devices that can handle future Android OS updates, and put more effort into upcoming devices. Sprint also said that upcoming Android 2.1 devices that have yet to launch will also be receiving the Froyo software upgrade.

I see more Sprint Hero’s than anything in this city (San Francisco), even after the iPhone and Motorola Droid, so it’s sort of sad to see that it will not be getting Android 2.2. The Samsung Moment… well, who has one of those, anyway? If these devices were to get Froyo in the future, users would probably have to wait after other devices were starting to see Gingerbread. So instead of having to play the waiting game, Sprint is just stopping the game all together.

Whatever the reason Sprint is not allowing Froyo, and as annoying as it may be to some, they have every right to do what they want. Now, to compensate, Sprint, bring us more Android phones that will be capable of handling future software updates.

Root your Sprint HTC EVO 4G in one click with SimpleRoot

The Sprint HTC EVO 4G has been rooted for a little while now, but don't you wish that it could...