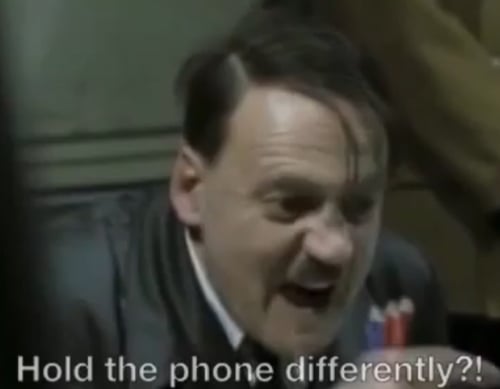 This meme isn’t dead yet, right? I know the original film producers had a bunch of DMCA notices issued, but the world needs to know how Hitler feels about the iPhone 4’s reception problems resulting from a bum antennae design and/or software problems. Despite strategic placements of microcells across war-torn 1940s Germany, Hitler’s iPhone 4 still failed to hold a call when held in his furious left hand. When confronted with the option to buy a bumper to fix the problem, the Fuehrer’s rage only flared brighter, and took aim at the App Store’s approval process. Before long Hitler crumpled, and his faith in iPhone and Apple was reduced to nothing but rubble and ash, leaving him to search for shelter elsewhere.

Steve Jobs: Cavalier and Out of Line Regarding iPhone 4 Reception Issues

There's a really old joke that goes, "Doctor, my arm hurts when I move it this way," and the doctor...