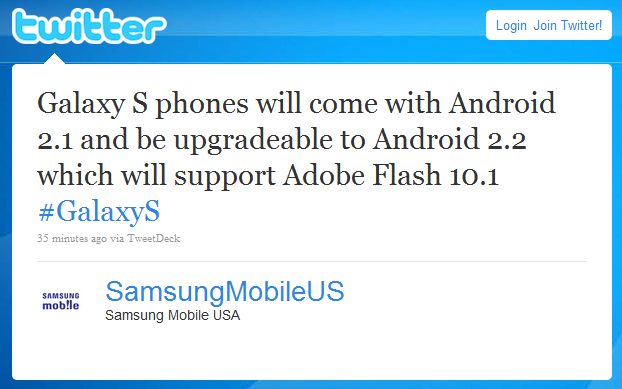 The announcement that all Samsung Galaxy S smartphone variants will be getting Android 2.2 Froyo OS updates may not be surprising, but confirmations of this sort are always welcomed. During their Galaxy S launch party in NYC today, Samsung confirmed that all of their recently announced Samsung Galaxy S devices will receive the Android 2.2, or Froyo update.

This announcement means that the Vibrant, Epic 4G, Captivate, and Fascinate will all receive Google’s latest Android software version, and that’s certainly gonna put a smile on potential buyers’ faces. But at the same time, are we surprised? All of the devices are pretty high-end when you look at their spec sheets, and they’re all basically the same device, save for the Epic 4G , which sports a slide-out QWERTY keyboard and a front-facing camera – something the other variants lack. It makes sense that the highest-end of the Android smartphone spectrum be blessed with Froyo updates in the near future.

Samsung is certainly not stepping down in the smartphone arena, it looks like they are just beginning when you look at the Galaxy S devices. Sporting the 1Ghz Hummingbird CPU and that class-leading Super AMOLED capacitive touchscreen display, the Galaxy S devices promise some of the best graphics that you can find in a smartphone today.When you add in the 6 axis tilt control (gyroscope), the Galaxy S takes gaming to a whole new level. Now, let’s just hope we get some more compelling games on the Android Market.

One of Froyo’s many stand-out features is its compatibility with Adobe Flash 10.1, and Samsung felt the need to tell everyone that through Twitter. The Nexus One is also in the midst of receiving the official Android 2.2 software update, and will be the first to support Flash 10.1 Player. Still, if Samsung has more devices on their way, and can manage to promote them as we are seeing with the Galaxy S lineup right now, I’d say they deserve at least 10% of the smartphone market.

Although most are painfully similar, which Galaxy S phone is the one for you?

It's been a long time coming, but AT&T has finally put to paper their reasoning as to why they do...