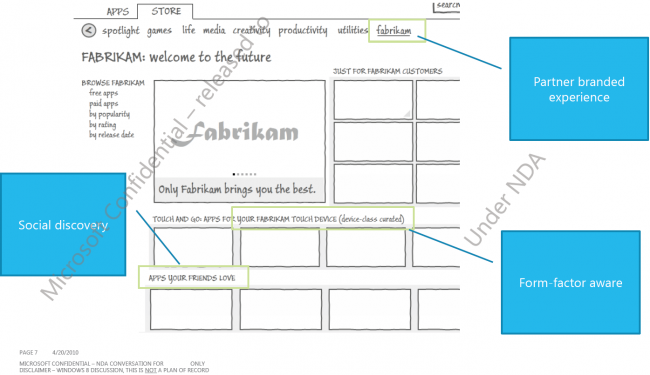 In a batch of leaked discussion documents from Microsoft mostly about Windows 8, there was mention of a new Windows Store, which on top of desktop software could very well be a new platform for selling Windows Phone apps. The slides, which are almost completely high-level, conceptual, and a far cry from any kind of finished product, describes that the store needs to be a “one catalog and one-consumer experience”. The slides also lay heavy praise on Apple, and show some very iTunes-esque  app concepts. Despite the fact that support for “devices” is mentioned throughout, and the Store experience will be “form-factor aware”, phones per se are never explicitly mentioned, and only tablets are pictured.

Zune software will already be operating as the media manager for Windows Phone 7, so it wouldn’t be a huge leap to begin incorporating applications for both mobile and desktop into the same interface. The Kin and Microsoft’s plan for Zune passes with the Windows Phone 7 launch further show Microsoft’s media and cellular businesses slowly growing into one another. As far as the on-device interface goes, there’s already a relatively new Windows Marketplace for Mobile that with any luck will sync up with apps bought through the Zune software. Combined with Xbox 360 connectivity, how this whole app delivery system ties in with the next version of the Windows desktop operating system will be the real decider if Microsoft’s “three screens” strategy pays off.

Hey Canada, fancy a Samsung Galaxy S? Looks like a treat could be in store for the true north strong...