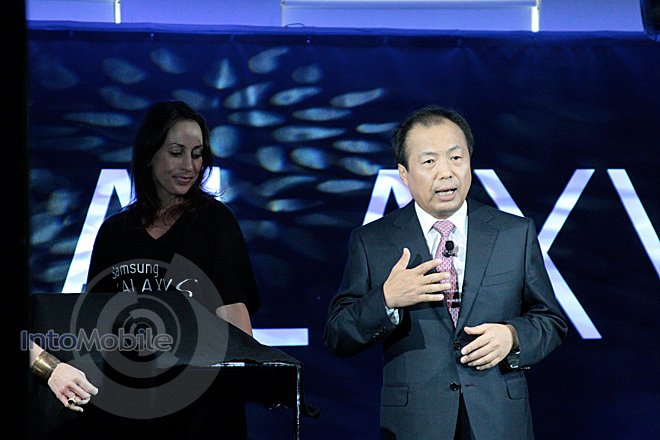 Last night, members of the media were invited to the Skylight West in New York City to be properly introduced to the Samsung Galaxy S, or rather, the US variants of the device. Not only did we have a chance to see wireless industry big wigs on the keynote stage, but we also had a chance to play around with and explore the nuances of each variant of the Samsung Galaxy S, without any serious commitments or leaving money on a bed side night stand.

Before the media were able to get their poke on, Samsung took a few moments to properly introduce the US variants of the Samsung Galaxy S. Sprint gets the Epic 4G, AT&T gets the Captivate, Verizon gets the Fascinate, and T-Mobile the Vibrant. During the keynote, Head of Samsung Mobile Communications J.K. Shin said Samsung would change the smartphone experience with the Samsung Galaxy S.

The Galaxy S combines the three best in hardware and software. Today, I am proud to say that we are introducing the Galaxy S to the United States. The Galaxy S will raise the bar in the U.S. mobile market in three vital areas: Screen, speed, and content. Because of these features, at CTIA I said in the race to redefine the smartphone, the starting gun has just been fired and the Samsung Galaxy S is already standing at the finish line. Tonight, I am excited to unveil the winners in this incredibly important race.

And unveil they did. The Galaxy S variants all had jaw dropping 4-inch Super AMOLED displays that could easily rival the iPhone 4’s Retina display. And, as proof that better things were to come, Samsung reminded us time and time again that the Galaxy S hardware on show last night were all pre-production devices. The Galaxy S variants also performed flawlessly jumping from application to application, especially when it came to running games like Gameloft’s Asphalt 5. We have the Samsung 1Ghz Hummingbird chipset to thank for the Galaxy S’s 3D gaming prowess.

Screen, speed, and content were three vital areas Samsung wanted the Galaxy S to raise the bar in, and judging by its performance last night, it looks like they’re on track to do just that.

We knew that the team over at CyanogenMod would be releasing Android 2.2 Froyo ROMs to devices soon, but we...