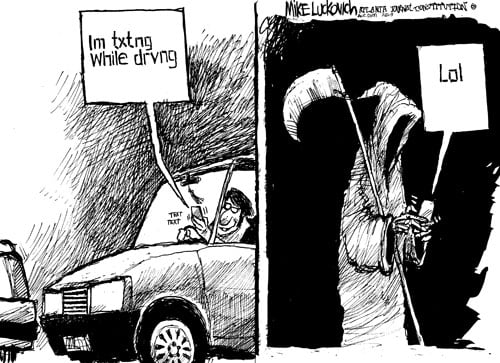 Yesterday, Michigan joined in the party, joining the 14 other states that have already banned texting while driving. Good on ’em for sure, as this is a law I’d like to see enforced not only in the US, but worldwide. Up here in Canada, texting while driving is being phased out, with hefty fines and reprimands being put in place. In Michigan, anyone caught will earn a $100 fine, and a second offense will bump the fine to $200. OMG! 🙂

The new law for the good folks in Michigan has some clear parameters. It doesn’t matter if you’re cruising down the highway, or stopped at a red light. You’ll get ticketed. If pulled over, the officer does have the right to take a look at your phone, however it can NOT be confiscated. It’s also worth noting however, that in Michigan it’s still ‘all good’ to talk on your device (bluetooth headset or no bluetooth headset) while driving. That stinks.

Now it’s up to the rest of the states to pass similar laws. Nothing drives me more crazy than pulling up next to someone that was driving dangerously in front of me, only to notice they are texting on their phone. Good grief… Fight the urge people, turn off your device or throw it in the glove box!

So, with that, I turn it over to you the readers. Does texting AND talking on the phone while driving really burn your britches? Do you want to see not only texting but ANY use of a mobile device behind the wheel banned for good? Are bluetooth headsets for use in the car a good thing or bad thing in your opinion? Sound off in the comments and let me know what you’re thinking. I have a feeling I already know…