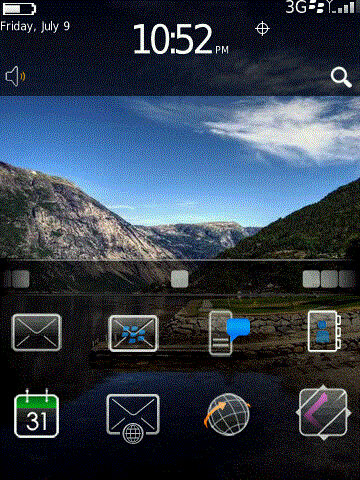 If you’ve already locked your jowls on the recently released video of BlackBerry OS 6… chances are you want it on your BlackBerry, and you want it now. Sadly, you CAN’T have it now, but thanks to the theme developers at WJD Designs… you can have the next best thing… a BlackBerry Theme based on BlackBerry OS 6.

The ‘Five Point Nine’ theme from WJD Designs brings a lot of the look and feel you’re used to seeing via the various BlackBerry OS 6 leaks we’ve had in the not-so-distant past. For all intents and purposes, the theme is the very same title that was released some time ago, titled ‘OS6’. I’m assuming RIM had a problem with this release, and they contacted WJD to make a change… ‘Five Point Nine’ is the re-jigged result. You gotta keep the legal beagles happy.

The theme is available now for the Storm, Bold, Tour and Curve series (on 5.0+). Hit up the download link below for all the goods… and as always, if you do purchase and install on your device… be sure to let us know what you think, right here in the comments!

Note: Yes, I did elude to some BlackBerry OS 6 goodness at the beginning of this post. In case you missed it, be sure to check out the video that RIM posted yesterday. It’s mostly stuff we’ve seen before, but still, it’s good to see RIM is trying to keep us in the loop on their latest developments. Looks like some new features such as a revamped BlackBerry Messenger and tighter integration with your Facebook and Twitter accounts could be a really good thing.