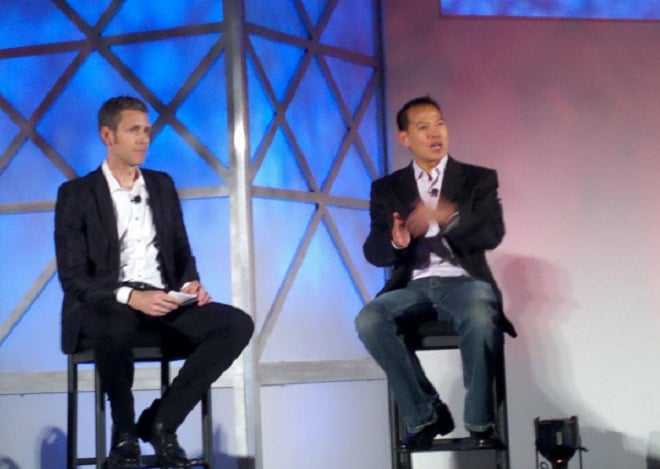 Facebook is quickly becoming a major force in the mobile space and the social networking company has no plans to stop. At the MobileBeat 2010 Conference, Facebook’s Erick Tseng said the company will be making strong efforts to become a mobile platform.

At his first major public appearance since leaving Google for Facebook, Tseng said the company is seeing great success with its dedicated mobile applications. The company now has 150 million active mobile users – That’s pretty darn impressive but it’s jaw-dropping when you consider the company had only 100 million users in February.

Tseng said Facebook will be bringing all of its desktop developer tools to mobile app makers. This includes Open Graph API, the ability to add the “Like” button and more. Basically, all the tools the company announced at the F8 conference will be rolled out to mobile devs over the next five months.

“We really see mobile as the future,” he said.

Why would they want to do this? Well, Tseng said layering an intelligent can make apps more useful and relevant. Take Loop Star, for example. This location-based service users Facebook to do the heavy lifting on the social side and Tseng said it has seen a five-fold increase of new user additions.

The company didn’t talk directly about its much-talked about location-based service offering but he talked about how LBS services could be used in the future. If you walk by a Starbucks and, say, 30 of your friends have “liked” a pumpkin-spice mocha, you may get a notification. He thinks having this social layer will make this more relevant than just geo-based coupon offerings.

The company is focused on growing as much as possible on the mobile side. This includes having a mobile-only experience where you can create an account without ever having a computer. This could be extremely important for developing countries like India.

Growth will be more important than monetizing at this moment, so don’t expect to be flooded with those Groupon ads on the mobile Facebook.

“We’re not particularly anxious to get ads rolled out,” Tseng said.

We’ve heard rumblings that the Apple iPhone will have native Facebook integration but Tseng didn’t have anything to announce. He did say this should just be a matter of time, though.

There was nothing too crazy coming out of this talk but it was another clear sign of Facebook’s growing importance in the mobile space. The platform play makes a ton of sense because it already on every major phone out there and it has a strong user base. Once its LBS offering is rolled out, I’d expect devs to stampede to Facebook for a smart social mobile experience.