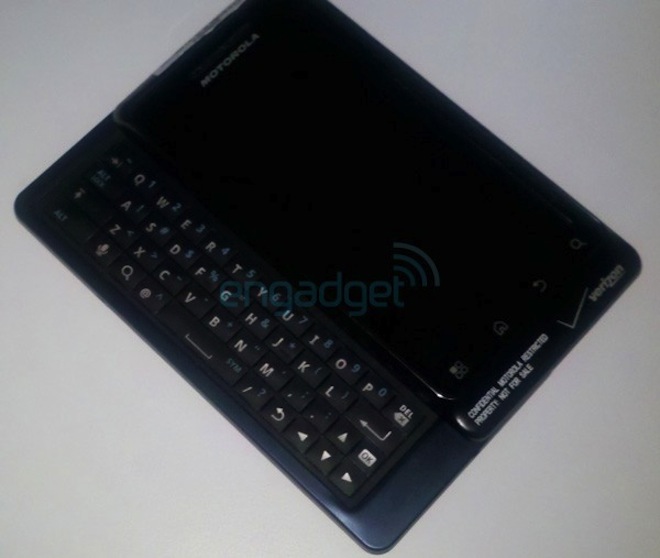 Some fresh shots of the rumoured Motorola Droid 2 have emerged, alongside rumours of a couple of BlackBerry devices and a tablet releasing by the end of the year. The Droid 2 is supposed to have a 5 megapixel camera and 1 GHz processor; combined with the fact that a batch of press shots have been dug out of the official Droid Does site, and the original Droid was recently discontinued on Verizon, the tip that an August launch is locked-in is highly plausible. The Droid 2 will nicely complement the Droid X as a high-end Android option with a full slide-out QWERTY keyboard. All of the hot item Android phones right now are full-on slates, like the EVO 4G and the Incredible, and the Droid 2 is in a good spot to capitalize on the lack of variety when it comes to form factors.

Alongside the Droid 2 is some info that the BlackBerry Curve 3 might be arriving in time for the holidays, which is most likely the “Kepler” 9330, whose cousin, the 9300, is headed to T-Mobile. It’s little more than an updated 8520, but the big differences between the two are still unclear. It can’t be 3G like the GSM version, since the 8530 already offers EV-DO that form factor. Hrmmm… There’s also word that the Storm 3 could be launching by the end of the year, which by the latest rumours will pack a 1GHz processor, have a 5 megapixel camera, updated SurePress, and run on LTE (which is convenient, considering we just saw Verizon’s new LTE SIM cards). The BlackBerry Storm 3 apparently won’t have OS 6, but something “different”; what exactly that entails is anyone’s guess, but I’d wager it’s Concierge built on OS 5.

As for the tablet, it seems unlikely to be the BlackBerry tablet, since we’ve only heard that it’ll be either 7″ or 8.9″, not the 10.1″ rumoured for this upcoming Verizon device. It’s probably an Android, but LTE tablets may not not be ready until next May.