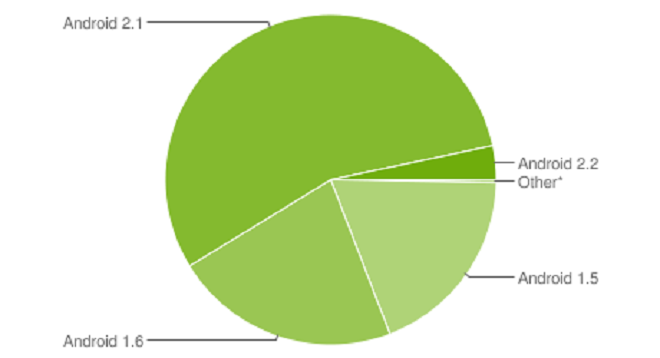 That dreaded fragmentation problem may soon be coming to an end, as Google said more than 55% of Android users are rocking the 2.1 version, or Eclair.

This shouldn’t be too much of a surprise, as all the high-profile handsets like the EVO 4G, Motorola Droid X and Samsung Galaxy S devices rock Android 2.1. The most successful commercial handset, the Motorola Droid, has also been upgraded to Eclair.

Android 1.6 is the second-most used version with 22.1% and 18.9% of users are still suffering with 1.5, or Cupcake. Nexus One users, and those who have rooted their handsets to install custom ROMs, are already rocking Android 2.2 but that’s only 3.3% of users.

This is pretty good news for developers because they can now create a baseline for how to create apps. Some content creators already did this, as the official Twitter on Android app is only available for Eclair users. Now that the majority of users are on this version, developers won’t have to leave many behind.

This also makes things easier for app creators moving forward because all the new devices will have at least 2.1. Sure, 2.2 or Froyo adds a ton of new features and improvements, but one can easily create a powerful program with 2.1 as the baseline.

As for devices like the Motorola Backflip stuck on older versions, you can rest assured that you will be getting 2.1 soon enough. Future versions after that may be iffy, but at least you’ll be able to tap into a wealth of apps. I don’t know how bright the future is for handsets like the Motorola i1 though.

Oh Android. We’ve seen that little green robot turn from an adorable little machine into a bad ass platform that is arguably the best smartphone operating system (calm down iOS fans, I said “arguably”). Check out our Evolution of Android post to see how much the platform has grown over the years.
Evolution of Android

[Via Google, hat tip to InformationWeek]

Listen up, Fring fans, and I mean that almost literally. The Android version of the application has been updated with...