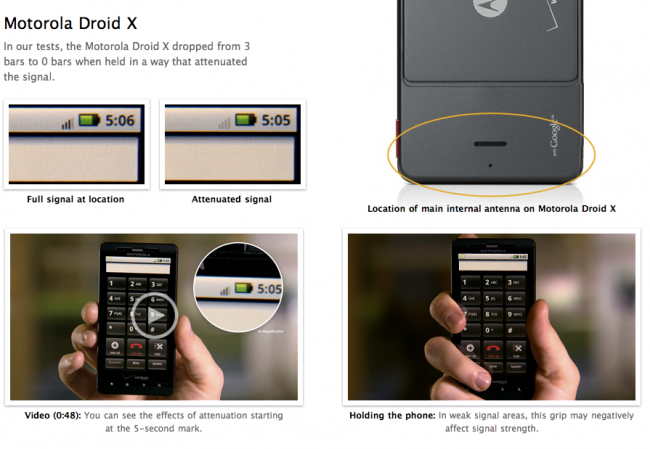 Just when you thought Apple was done bashing other smartphones on its “Smartphone antenna performance” web-ucational page, the iPhone maker adds the Verizon Motorola Droid X to its “antennagate” lineup. In doing so, Apple essentially calls out Verizon and Motorola’s Android-powered Droid X flagship for losing reception when its antenna is covered up by a human hand – the “Death Grip,” which was made public and popular by the iPhone 4.

Make no mistake. The Motorola Droid X is the epitome of an Android superphone, and is only rivaled by the Sprint HTC EVO 4G. By showing that even the creme de la creme of Android phones also suffers from the “Death Grip,” Apple is trying to prove to the world that the iPhone 4 is not alone in its antenna issues.

The updated Apple webpage indicates exactly where the Droid X antenna is located. It also posts a video showing a hand model grabbing the phone with their right hand and causing the signal bars to dwindle from three bars to none. Easing the grip on the phone immediately brings the signal bars back to life.

Intrigued? Well, before you believe all the hype, we have to say that our Droid X doesn’t seem to be affected in the same way as the handset in the video. In comparison, we can sometimes get our iPhone 4 to lose signal by holding in the “Death Grip.”

So, are you still planning to get a Droid X?

It was Wall Street week as Apple, Microsoft and Nokia posted very different quarterly earnings and these provided great insight...