If you had any doubt that Samsung is trying to become the next Apple, look around. With the Galaxy S,  Galaxy Tab, and upcoming Galaxy Touch media player they have in the works, Samsung is getting into the core areas where Apple shines. And, Samsung is going about their mobile strategy in much the same way as Cupertino – three different devices with the same OS, with the company telling you somehow need all of them. Most recently, they’ve been giving Galaxy S phones out to unhappy iPhone 4 users on Twitter.

It looks like Samsung is looking for users on Twitter that were complaining about their iPhone 4 units. Some of those users got a reply back from SamsungUKMobile, saying that they are sorry to hear about those users’ iPhone 4 issues and that if they Direct Message them on Twitter, Samsung would send them a free Galaxy S. Sound too good to be true? Yes. Is it? Nope, it’s true. We have confirmation from one of the people Samsung contacted who was just as skeptical.

My iPhone and I have been inseparable for almost a month now, tomorrow being one month since the iPhone OS 4 launched. But the honeymoon period ended this week as repeated dropped calls, and a sudden unexplainable inability to make or receive calls or send texts left me disgruntled.

So I did what anyone else would do: I vented my frustration on Twitter. Imagine my surprise, then, when this morning I am tweeted by Samsung offering me a free Galaxy S, their latest phone. Too good to be true? I decided to investigate.

I called a friend at Samsung, and though she was initially skeptical (sic), it has now been confirmed: the campaign is legit. Samsung is so confident about the superiority of the Galaxy S that they’re sending free ones to existing iPhone customers so they can decide for themselves. 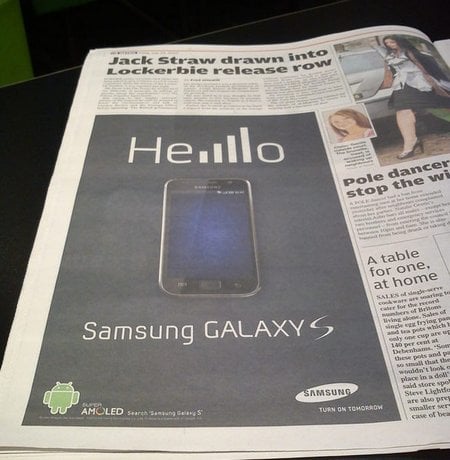 If that’s not enough for you, check out Samsung’s new ad that appeared in the Metro Newspaper (above). The ad is simple and to the point. While hardly as snarky as Motorola’s Droid X newspaper ad, Samsung also seems to be taking a jab at the iPhone 4 and its “Death Grip” antenna problem.

Does the Galaxy S have what it takes to compete with the iPhone 4? Well, the UI is pretty iPhone-like, as is the hardware design. The Galaxy S has that 4-inch Super AMOLED display and all sorts of features that the iPhone lacks (removable battery, expandable storage, face detection for photos, etc.). The hardware argument is solid. And, if iPhone users were to jump ship to the Android clan, they would find the Galaxy S a good phone to help them ease into Android OS. So, yes, the Samsung Android superphone has what it takes to go toe-to-toe with iPhone 4.

Samsung is not playing around, they have every intention of stealing as much market share from Apple, and anyone else, for that matter. With this kind of unrelenting push, they will likely succeed, at least to some extent.

What’s your take? Should Samsung tone it down, or go full throttle?

For those of you waiting to get your hands on the HTC Desire from TELUS, it's looking like the wait...