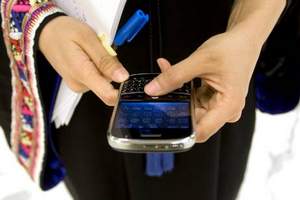 If you’re a die-hard BlackBerry fan and power user, be glad you live where you do — unless you live in the UAE. Apparently, the laws and regulations there don’t play too kindly with BlackBerry services, so there is a chance that the mobile devices may be banned in the future. Part of the reason why is what makes BlackBerry so unique and widely used by business and enterprise users. Its data transmission is encrypted and regarded as probably the most secure in the smartphone world, and the way it is managed and transmitted makes it that much harder to render a BlackBerry susceptible to attack.

However, legislators in the UAE seem to believe that such a complex security system can also be misused and abused by certain users. The government said as reported by The National:

“BlackBerry operates beyond the jurisdiction of national legislation, since it is the only device operating in the UAE that immediately exports its data offshore and is managed by a foreign, commercial organisation,” the Government said in a statement on the official news service, WAM.

“As a result of how BlackBerry data is managed and stored, in their current form, certain BlackBerry applications allow people to misuse the service, causing serious social, judicial and national security repercussions.”

Since BlackBerry works and operates outside of the UAE’s shores, the government there believes that it could potentially cause a security risk. Misusing the BlackBerry service gives people the opportunity to cause “serious social, judicial and national security repercussions,” and while that might sound a little extreme to those of you who do nothing more than troll Ubertwitter all day and BBM your friends, a government highly concerned with national security and terrorism does have a point.

“We have been working for a long time to resolve these critical issues, with the objective of finding a solution that safeguards our consumers and operates within the boundaries of UAE law,” says the government.

Unfortunately, in some other countries, BlackBerry services like BlackBerry Messenger have been blocked due to RIM’s denial of requests for access. In others, like India, RIM has allowed some access to user data which resulted in some controversy. It would be a tough trade-off for RIM to compromise its own security to comply with a government’s demands and potentially use all of its users in that country, but RIM has stuck to its guns.

One can only assume that if the UAE fails to find some sort of compromise with regard to its stance on BlackBerry services, both the services and handsets will be banned from that region.

A quick one here for all of the BlackBerry users out there. If you like to 'tweet' on the go,...