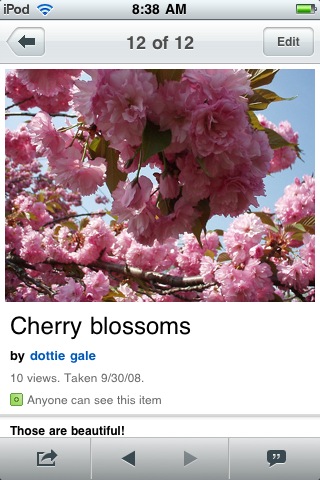 Flickr’s iPhone app, launched in September, has been updated to version 1.2 so you can upload HD videos taken on the iPhone 4’s 5 megapixel camera, and share posted pictures to Twitter. Additionally, the app takes advantage of iOS 4’s new multitasking abilities, letting you upload stuff in the background while you’re doing something else. There are a few UI tweaks that you can see in the video below.

As always, the Flickr app lets you search, browse and upload pictures to the photo service. Tags and albums help you keep everything organized, and friend and group systems make the whole thing really social. The iPhone 4’s camera is really fantastic, and I would imagine that you’d want to share pictures in as many places as possible. That being said, if you’re not particularly close with Flickr, you could always nab Pixelpipe instead, which can post images to many different networks at once, and also supports uploading 720p videos.

Links to download both of Flickr’s mobile apps are just after the video demo.