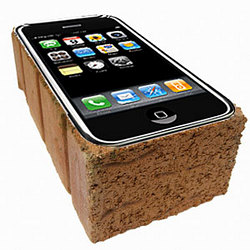 So the government made some exemptions to the DMCA yesterday and you went to jailbreak your Apple iPhone almost instantly. Knowing well enough that it was no longer illegal, the jailbreak shouldn’t be too much of a problem, right? Apple says you can go right ahead, but it won’t supoort the practice at all, even if the DMCA rules have been tweaked. Jailbreaking your iPhone will still void its warranty, and that could prove to be a problem down the road, or perhaps immediately if you end up bricking your device from the jailbreak. It happens.

“Apple’s goal has always been to insure that our customers have a great experience with their iPhone and we know that jailbreaking can severely degrade the experience,” said the company to Cult of Mac. “As we’ve said before, the vast majority of customers do not jailbreak their iPhones as this can violate the warranty and can cause the iPhone to become unstable and not work reliably.”

Apple also adds that most consumers don’t jailbreak their iPhone handsets due to the instability it could cause to the operating system. iOS already supports multitasking and the iTunes app store has over 200,000 applications – what homebrew apps or features could you possibly want that are worth voiding your warranty? Do the consequences outweigh the perks and benefits?

Of course, if you’re the type inclined enough to do something like that, perhaps you already know what you’re getting yourself into. Apple has warned its users several times about jailbreaking, and we’ve also seen some of the security issues the iPhone has faced in the past due to the practice, but people still go on and do it anyway – most with a decent amount of success. Either way, consider it a fair warning from Apple. Just because it’s legal now and perfectly okay under new DMCA rulings doesn’t mean the company will support it.

It's exciting times if you're in Canada, and are itching to get your hands on the iPhone 4. With the...