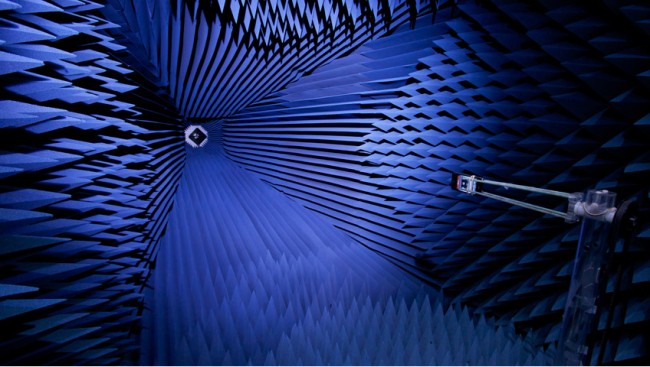 Apple is apparently done with all the iPhone 4 antenna mud-slinging that’s been going on between itself and smartphone competitors like Motorola and RIM. Today, the iPhone maker has removed all the videos it had previously posted on its “Antenna” page, which showed devices like the Motorola Droid X and Nokia N97 Mini exhibiting a loss in wireless signal strength when in just the right way. In the videos’ place, the webpage shows off its $100 million antenna design and testing facilities.

For something like a fortnight, Apple has been putting competing smartphones (and their respective manufacturers) on blast, demonstrating that it’s not just the iPhone 4 that shows signal reception losses when gripped tightly in the hand. After posting up videos and explanations of how to forcibly attenuate the wireless signal of smartphones from Nokia, HTC, Samsung, Motorola and RIM (BlackBerry), it looks like the iPhone maker has decided on a less contentious method to show the world that the iPhone 4 is not flawed. The apple.com/antenna webpage is now filled with images, video and text highlighting the company’s antenna testing labs.

For its part, Apple is saying that the videos were pulled from the website as a matter of routine updates. In regards to the videos, an Apple spokesperson told Cnet that “We constantly refresh the content on Apple.com. If you’d like access to them, you can find them archived on YouTube.com/Apple.” And, true to the statement, if you go to Apple’s video uploads (here), you’ll find all the original videos depicting non-iPhone smartphones losing signal strength in various scenarios.

Strangely, a quick check of the Canadian version of Apple.com shows that the signal attenuation videos are still posted for all to see. It’s not clear if the changes are just slow to take in the apple.com/ca/antenna page, or if the higher-ups at the company have different PR strategies for different countries.

Whether this marks the end of Apple going out of its way to prove that the iPhone 4 antenna issue is overblown, or if the updated webpage is just part of the company’s usual M.O., it’s good to see things getting back to normal in Cupertino.

I've read report after report of things you can do to improve iOS 4 performance on the iPhone 3G. The...