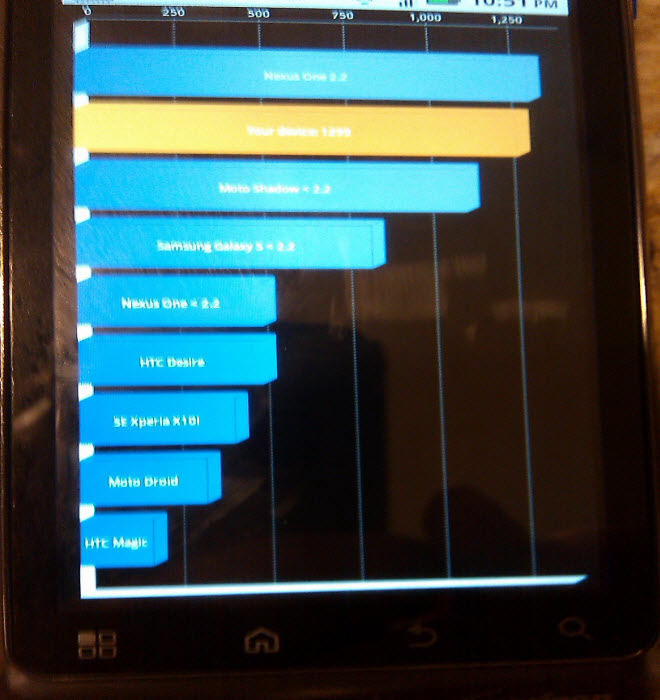 The next hottest Android phone due to hit Verizon will be the keyboard-toting Motorola DROID 2, and thanks to an extra special tipster, we now have benchmark results and hands-on information on just how good this handset will be. According to our inside source, the DROID 2 is all that we expect and more. The benchmark pegs the Android 2.2 Froyo smartphone towards the top of the current heap of Android handsets, with a Quadrant benchmark score of 1299; a figure that improved greatly when the handset moved to its latest Froyo build. Memory management is also improved with Froyo and there is no perceptible lag, even with all the eye candy that accompanies the Android 2.2 update.

The DROID 2 sheds some of the hardware quirks that Motorola overlooked with their original DROID, with a rock solid slider that shows no wobble and a keyboard with convex keys, better spacing, and overall improved performance. As was shown in leaked photos, Motorola decided to swap the D-Pad for directional arrows; a feature our tipster regarded as a move sideways and not necessarily an improvement. It all depends upon your personal preference.

In addition to the benchmark busting performance of the handset, we were also able to gain the following information regarding the hardware and pre-installed software:

Overall, the handset is shaping up to be an excellent successor to the original DROID and a worthy competitor to the Motorola DROID X, especially for those who prefer a hardware keyboard and a smaller form factor. Hopefully, that rumored August launch date will pan out and we can all stop reading about the DROID 2 and finally start using it.

Watch out Sprint, Verizon is prepping its 4G network to go live this year with data cards and LTE handsets...