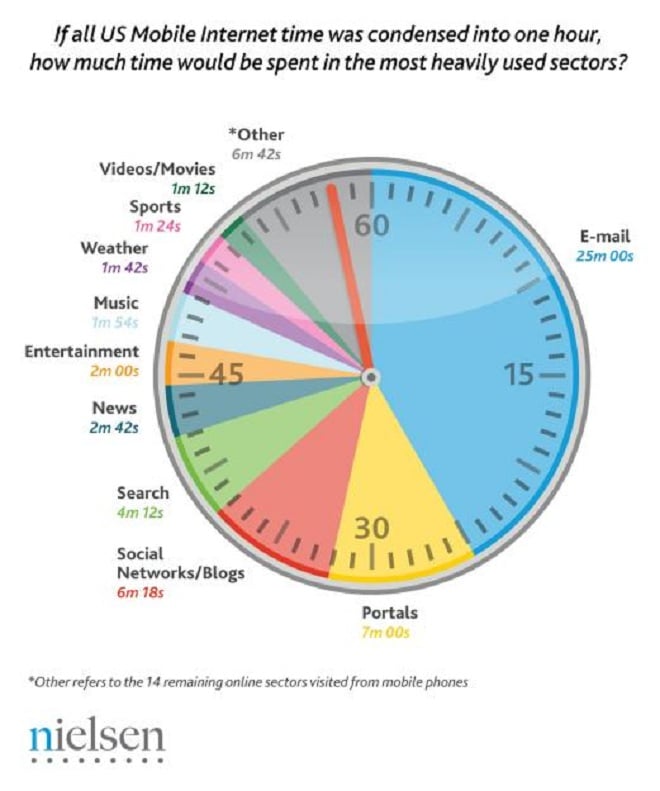 Despite all the super cool video-streaming capabilities of things like Hulu Plus, a new survey from Nielsen indicates that e-mail is the most common mobile Internet activity.

As you can see from the chart above, mobile e-mail is the most common activity, followed by portals, social networks and search. I expect a few of these categories to grow exponentially as smartphones become cheaper and more prevalent, but the dominance of mobile e-mail is one of the reasons Research In Motion is still the king of the U.S. smartphone market by a pretty wide margin.

The BlackBerry is still the best mobile e-mail device out there. I love Android’s Gmail integration and the iPhone’s Mail has been improved but RIM’s still the king of getting this kind of work done on the go.

That’s why I’m not quick to discount RIM, as it has a dedicated following of Crackberry addicts. Additionally, we’re seeing reports that the BlackBerry Messenger service is really resonating with teens. This makes sense because it essentially provides a private chat room that won’t kill your monthly bill. BlackBerry is really pushing this service too, as I’ve seen loads of BlackBerry Messenger ads on TV and on billboards.

The major knocks against RIM is that its user interface is outdated, the app catalog is weak and the BlackBerry hardware is not up to snuff. Two of those issues may be address tomorrow, as the company will likely unveil the BlackBerry 9800 with the new BlackBerry 6 platform. It is also rolling out the next generation of its App World, too.

I really expect social networking to surpass mobile e-mail in the not-too-distant future, especially as Facebook plans to dominate the mobile world by becoming a platform. As the service gets more users, it just makes sense for handset makers and app developers to leverage Facebook’s social graph for a more social mobile experience.

The iPhone and Android operating systems are taking the US by storm, and it seems Google's mobile OS has just...