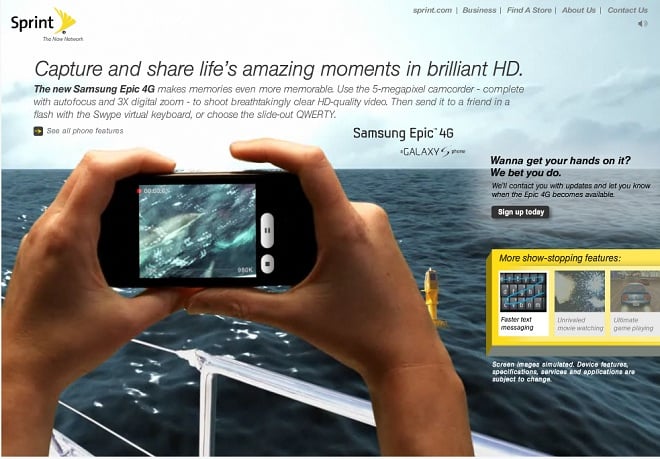 Sprint continues to tease us about the upcoming Samsung Epic 4G, as it just launched a new page for the upcoming Android superphone.

There’s nothing really new on the page besides the ocean sounds in the background and the emphasis on the Swype virtual keyboard but we already know the Epic is going to be a killer handset. As the name implies, you’ll be able to use Sprint’s 4G network for mobile data in the available markets. This will likely come with that $10 monthly premium that also accompanied the HTC EVO 4G.

Even without the WiMax access, the Samsung Epic 4G would still be a nice phone. The Galaxy S device sports a 4-inch Super AMOLED screen that should be crisp and vibrant. In our reviews of the other Samsung Galaxy S phones, the T-Mobile Vibrant and AT&T Captivate, the Super AMOLED screens were singled out for its exceptional viewing quality.

The Epic 4G stands out from the rest of the Galaxy S lineup by having a full, slide-out physical keyboard and a front-facing camera for video calls. It will also have a 5-megapixel camera that can do 720p HD recording, as well as a 1 GHz processor.

So, when can we get some Samsung Epic love? Unfortunately, the teaser page doesn’t give us any clues but we do know that the device just cleared the Federal Communications Commission. Other rumors indicate the superphone could hit as soon as August 20, so it looks like we won’t have to wait too long.

Because it has a full QWERTY keyboard, the Epic 4G will probably be directly competing against the Motorola Droid 2 on Verizon Wireless. The Samsung device has the advantage of faster mobile data but the Droid 2 should be on the receiving end of a major marketing push by Big Red.

Check out our hands-on video of the Sprint Epic 4G, a Samsung Galaxy S Android superphone.

You've gotta love Twitter, especially when unofficial-yet-official announcements like the one above go out. While it's not a press release...