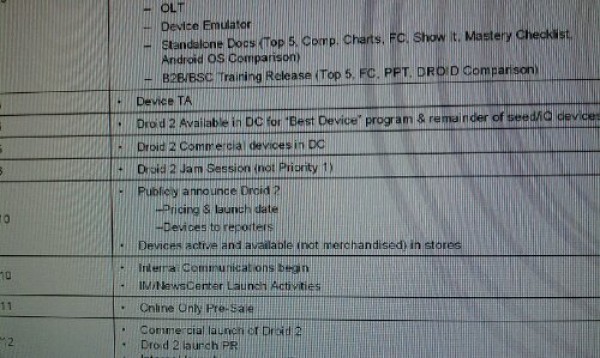 It looks like the Motorola Droid 2 may be set to launch with Verizon on August 12th, with the official announcement coming just two days prior. Coming from a leaked internal document from possible the worst photo ever, things are starting to fall into place, and the successor to the original Motorola Android phone may indeed be coming next week!

If you are in need of a keyboard on your Android smartphone, and you are looking to get (or stay) on the Verizon network, you’ll be happy to know that the Droid 2 comes with a revamped slide out QWERTY keyboard that looks and works miles better than the first Motorola Droid. Also included in the Droid 2 is Android 2.2 OS (Froyo), which is pre-installed, so you won’t have to worry about waiting for an OTA update hitting your handset – you’ll already have the best Android experience out of the box!

Pricing and availability looks like it will be announced on the 10th of the month, the 11th will give users the ability to pre-order the device online, and the 12th will be the official release date. We’re hearing whispers from one of our sources that the dates mentioned above are legit, so here’s to crossing fingers and hoping for the best!

Even without Froyo in tow, the D2 hosts many new upgrades from its predecessor:

We saw just how well the new Android smartphone performs in benchmark tests, and we can’t wait to get this thing in our hands. While the hardware of the device has not changed dramatically, you can expect to see quite the performance boost with the 1GHz CPU and Froyo’s JIT compiler that makes the whole OS fly.

While we don’t have confirmed pricing for the the D2 yet, I’d have a hard time believing that the device would be more that $199, plus a pesky mail-in rebate if you walk into a Verizon store. If that is the case, you may want to check out Best Buy, as they automate MIRs. Too bad Verizon isn’t putting on a massive, nation-wide scavenger hunt for this bad boy, too.

If you’re on the fence as to which Droid device you want, check out our Droid X review here. We’ll be sure to keep you updated on any news of the Droid 2 as it comes to us.
REVIEW: Verizon Motorola Droid X

How To: Manually install Android 2.2 Froyo on your Motorola DROID for Verizon

It's here folks - the official Android 2.2 Froyo update has been leaked for the Motorola Droid, and we've got...