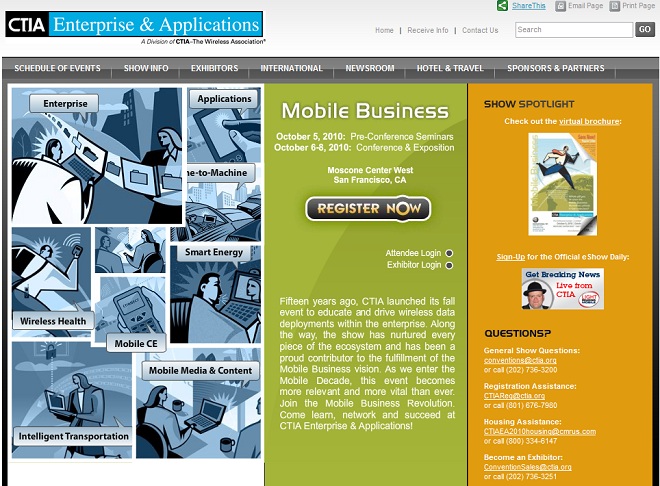 We just heard about who will be keynoting the upcoming CTIA Enterprise & Application show and it will be filled with bigwigs from Verizon Wireless, AT&T and Ford.

Verizon CEO Lowell McAdam will kick things off on the first day (October 6) and he’ll be talking about the company’s 4G network based on Long-Term Evolution. Verizon is in the middle of a massive rollout and Big Red plans to have most of the nation blanketed with 4G loveliness by 2015.

AT&T CEO of business solutions, Ronald Spears, will wrap things up on October 8 and he’ll be talking about how the connected car can have an impact on businesses and carriers. We’ve seen some cool car tech involving mobile, so it will be interesting to see what else is on tap.

Unlike the spring show, this CTIA is focused on enterprise, businesses and the sausage-making with carriers, but we’ve always found there’s a ton of consumer-centric products and apps. We’ll definitely be there to keep you up to date on any relevant news.

An interesting subplot of this year’s CTIA show is that it will be the last in San Francisco for the foreseeable future. The CTIA is taking its ball and going home (or San Diego or Orlando) because San Francisco has implemented an ordinance which requires cell phone vendors to display the amount of radiation that’s emitted from the devices.

The CTIA believes this is overkill that will only confuse customers because all U.S. phones already have to pass through the Federal Communications Commission with a certain radiation threshold. In fact, the CTIA is suing the city over this requirement.

San Francisco counters that it is just trying to give customers as much information as possible in order to make an informed decision. The city likens it to requirements which make fast food joints display the caloric content of their grub. What do you guys and gals think?