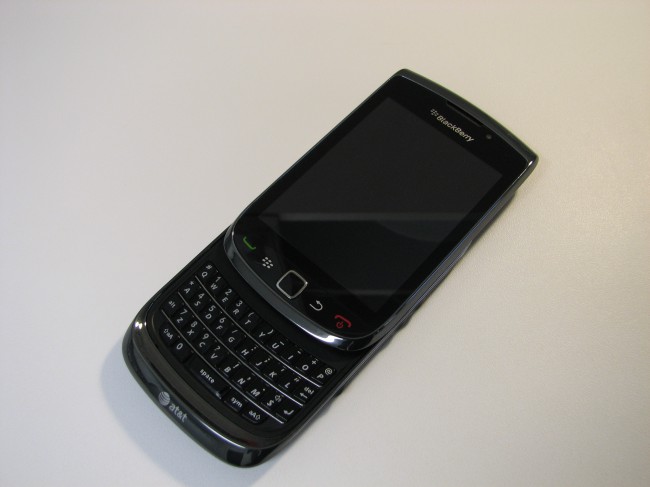 After some delivery and technical difficulties, we’ve finally got some impressions of the BlackBerry Torch 9800 that’s coming to AT&T this Thursday. We’ve blasted through the hard specs following the announcement earlier this week (5 megapixel camera, 512 MB of RAM, 624 MHz processor, Wi-Fi b/g/n, GPS, HSPA 3G), and blew through the software following the WES announcement of OS 6 (comes with a new Webkit browser, refreshed user interface, multi-touch zooming, and a bunch of other refinements to the old BlackBerry experience). After all of the talk and announcements and hooplah, how does it actually feel?

I’ve only spent half a day with the device, but there are a few things that stick out. The main complaints that have surfaced so far are the processor speed (which some see as sub-par compared to 1 GHz processors currently out there), and the screen resolution (also outlcassed by higher-end smartphones). Firstly, the device doesn’t feel or handle slowly in any way – the software is extremely well-polished and has yet to skip a beat after I’ve loaded it down with applications. The user interface is generally smooth and responsive, though it feels at times to react a little slowly (though the animations manage to keep their composure). Pinch-zooming both in the browser and multimedia aren’t as smooth as I’d like them to be. Complaints about the screen resolution are more well-founded, but only slightly. The only people who will feel the pictures look dull or jagged will be people spoiled by the cream of the smartphone crop. That being said, I doubt the Torch will win over people devoted to iPhone or Android based on looks alone.

I’ve found typing on the BlackBerry Torch 9800 takes some getting used to coming from the Bold 9000. The keys feel really small, and you have to get in the habit of using the very tip of your thumb, or else you’ll be hitting the upper slider portion when clicking away at the top row. The virtual keyboard has fared very well for me so far. Both landscape and portrait options work great, and are especially snappy and responsive. The accelerometer reacts quickly, and maybe even a little too sensitive.

As far as build goes, it’s a little heavy – probably on par with the Storm. The lines and style aren’t anything especially new and largely follow the precedent set by the Storm series.

The BlackBerry Torch is a really big deal for RIM, and as such I’m going to reserve my full judgements until a full review in a few days. Until then, here are some pictures, and the unboxing video cut tragically short by a faulty camera battery. Part two is coming tomorrow, so sit tight.

Right in time for the BlackBerry Torch, Research In Motion has released its BlackBerry Desktop Software 6 for PC users....