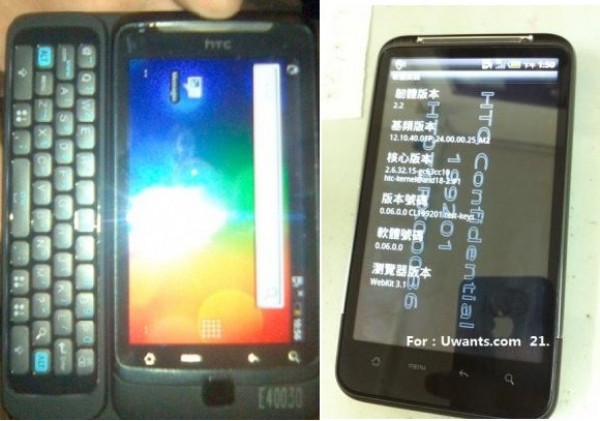 We’ve  been hearing the name Project Emerald for some time now in reference to a secret handset coming our way on T-Mobile, and we have had many guesses as to what it could be – today, it looks like Project Emerald may be the launch of two high-end HSPA+ devices, the HTC Desire HD, which may launch as the MyTouch 3G HD, and the HTC G1 Blaze.

We’ve seen the HTC Desire HD and the HTC G1 Blaze smartphones floating around before, but the idea of seeing both handset launching at the same time sounds like a solid win for T-Mobile. If the launch of the Samsung Vibrant (T-Mobile’s Samsung Galaxy S variant) told us anything, Magenta is starting to wake up and smell the high end smartphones.

One of the Project Emerald handsets is suspected to launch on the 22nd of September, with the other following shortly afterward on the 29th. We were already expecting the carrier’s first HSPA+ device sometime in September, but we definitely weren’t expecting two devices in the same month!

The G1 Blaze is rumored to have a 3.7 inch touchscreen with a slide-out QWERTY keyboard, and will possible have a 1.3GHz processor under the hood. With Android devices like the Sprint Samsung Epic 4G, and the Verizon Motorola Droid 2 right around the corner, the G1 Blaze should have no problem giving T-Mobile some serious hardware to compete with.

The MyTouch 3G HD looks like the MyTouch 3G Slide without a keyboard, and sports a larger screen. We’re thinking this baby could have a display somewhere from 3.7 to 4.3 inches, but we won’t know until the smartphone is officially announced, or at least until we get some more leaks on the device.

Phandroid’s source also made mention that the G1 Blaze looks different than the pictures we’ve been seeing, though we’re not sure how drastic the changes will be. If I could make a suggestion, HTC would do well to add a dedicated number row to the Blaze. From the pictures we’ve seen, the keyboard on the device looks nice, but it looks rather small, and the size of the screen may make the weight and balance of the device uncomfortable when the keyboard is opened. Just one more row on the keyboard, please!

Here’s to some awesome phones coming our way. Looks like it may soon be time to upgrade the Vibrant.

Oh, and speaking of which, make sure to check out our full review of the T-Mobile Samsung Vibrant here.
REVIEW: Samsung Vibrant, T-Mobile’s Galaxy S phone gets reviewed

Motorola CEO not worried about a Verizon iPhone

Motorola CEO Sanjay Jha said he isn't too concerned about the growing rumors that the Apple iPhone is coming to...