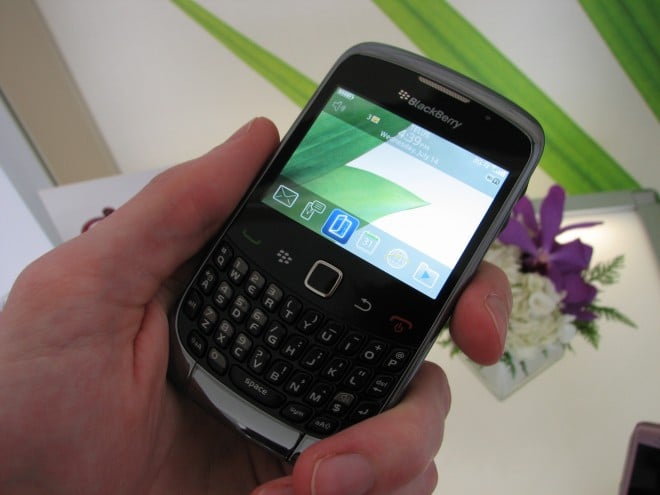 Rogers and Bell have already outed their new OS 6-capable BlackBerry Curve 3Gs, and now Telus is joining the party.The BlackBerry 9300 isn’t much to look at on the surface: the QVGA display, 2 megapixel camera, 3G, Wi-Fi, GPS and 256 MB of memory all closely resemble its predecessor, the Curve 8530. The biggest difference is that the 9300 will at some point be able to run OS 6, which will also be made available on the Pearl 9100, Bold 9650, and Bold 9700.

OS 6 came into the world this week on the BlackBerry Torch 9800, which is considerably higher-end than the 9300, which makes it surprising that Telus is asking $199 for the Curve 3G on a three-year contract. Don’t get me wrong, I like the improvements offered by BlackBerry 6, and HSPA world roaming is nice touch for some, but I don’t know that those improvements are worth $175 more you’re paying (plus the fresh contract) versus the Telus 8530. Even the considerably nicer Bold 9700 is only $100 on contract, and Bell’s offering the Curve 3G for $49.95, and Rogers is only a little pricier at $79.99. Jussayin’.

If, for some reason, you’re compelled to pick up the Curve 3G 9300 on Telus, you can find it over in their online store.

UPDATE: Website error, apparently. Telus has knocked the price down to $79.99 on a three year contract. Phew, good, that makes a lot more sense.

The government of India started playing hardball yesterday with Research In Motion, threatening to shut down BlackBerry services in the...