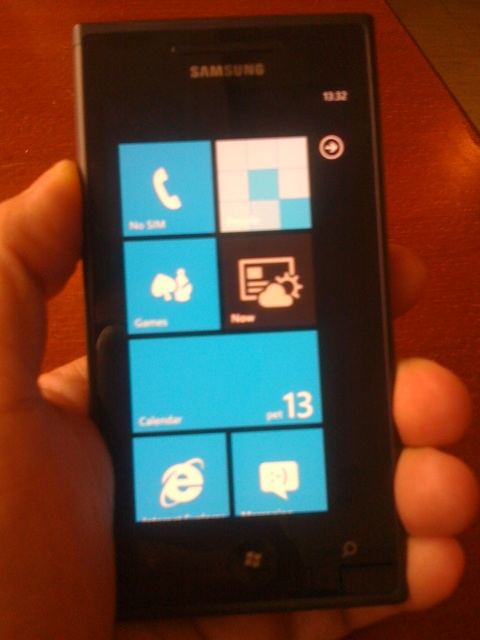 More eye candy for Microsoft fans as another Windows Phone 7 prototype has been spotted in the wild. Under the camera lens this time is a modest looking unit from Samsung. This gem is reportedly owned by Matjaz Sircelj, a Technical Community Manager at Microsoft and is presumably one of the many WP7 handsets that will fall into the hands of Microsoft employees over the next few months.

Little is known about the handset.  The source of spy photo, Andrej Tozon, would only confirm that “it is a prototype samsung” and that “it’s larger than your ordinary phone”. AT&T is rumored to be getting the 4-inch Samsung Cetus and, though this is not said to be the Cetus, this handset may give us a some insight into Samsung’s planned industrial design for WP7.

Similar to the Omnia-like early review units which were handed out like candy to a select group of developers and journalists, this Samsung-branded Windows Phone handset may be destined for development and review purposes only. Equally likely is the possibility that the handset may be headed for commercial release. Without more details, we really can’t predict the future destination for this handset.

While we wait for additional Windows Phone 7 details to emerge, we can enjoy these quick glances at the potential future of this new mobile platform. Samsung is a confirmed launch partner for Windows Phone 7 so hopefully we will see a few more offerings hit the rumor mill before Windows Phone 7 debuts later this year. Anyone excited?

Leak: Photos: HTC Mozart [Ummm, why does this look exactly like the HTC Schubert?]

Several days ago I showed you a video of what I thought was the HTC Schubert. Now there are some...