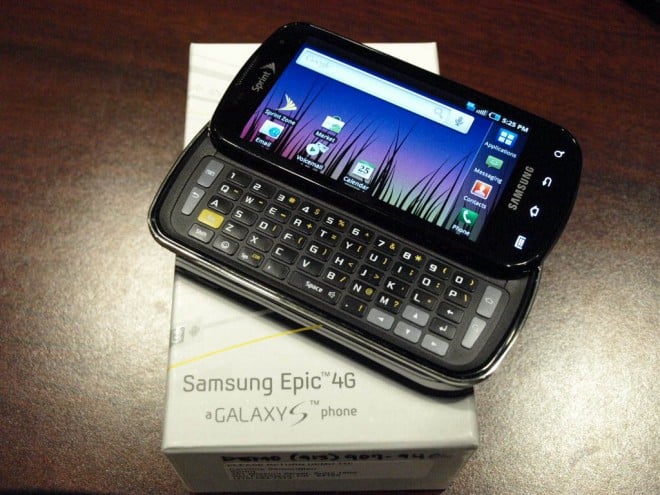 While the likes of T-Mobile and AT&T have already launched their own variants of the Samsung Galaxy S – as the T-Mobile Samsung Vibrant and the AT&T Samsung Captivate – Sprint has yet to get official with their own Galaxy S Pro variant, the Samsung Epic 4G. So, in the interest of giving all you Sprint customers and QWERTY-loving Android users out there a sneak peak at the upcoming Epic 4G, we managed to wrangle one for your drooling pleasure. Seriously, if you want an Android phone that has a generously proportioned touchscreen (a Super AMOLED touchscreen, at that), and you just can’t do without a slide-out keyboard, the Epic 4G is your best bet right now. But, is it truly “epic”? Keep reading to find out! 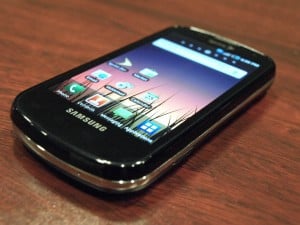 As a quick refresher, you should know that the Sprint Epic 4G is made by Samsung. It’s a customized version of the Samsung Galaxy S Pro, which is nearly identical to the Galaxy S, but adds a slide-out QWERTY keyboard. That means this bad-boy is packed with a 1Ghz Hummingbird processor and GPU, 4-inch Super AMOLED WVGA touchscreen, 5-megapixel camera (with LED flash – something the Galaxy S lacks), front-facing camera (another feature lacking in the Galaxy S), GPS, 4G data (not available on any other Galaxy S variant), WiFi b/g/n, Bluetooth, 3.5mm headphone jack, and of course the QWERTY keyboard. Oh, and everything is powered by Android 2.1 OS.

Unboxing the soon-to-be-released Sprint smartphone proves that Big Yellow is still gung-ho on eco-friendly package design. The Epic 4G comes in a small package that cuts down on waste. The package is decidedly more visually appealing than the TV dinner-esque Sprint HTC EVO 4G retail box, but still puts a priority on being as “green” as possible. The box certainly isn’t “epic,” but that’s a good thing.

The first thing you’ll see when unboxing the handset is the big 4-inch Super AMOLED display that sits flush in its smooth slab of a front face. Pull the tab on the phone tray, and you get access to some documentation. Pull a tab on the document tray, and you’ll be greeted by a microUSB data cable, wall charger brick, and a pair of really impressive in-ear headphones. It used to be that smartphones would ship with sub-par headsets with our phones, but the Sprint Epic 4G steps it up a notch with a high-quality looking headset/earphones.

Next, you’ll probably want to get to playing with your shiny new toy. The first thing we did was slide the QWERTY keyboard open with a confident “snick.” The slider mechanism has a slight spring-assisted action, that makes it almost fun to slide the keyboard in and out. In and out. In and out. Sorry, we got distracted there for a minute. 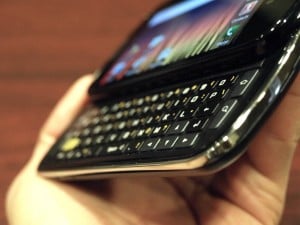 If you can manage to ignore the scent of the curing resins and brand new plastic – telltale scents of a new gadget – you’ll probably start tapping away at the keyboard. What you’ll notice is that the keyboard keys are really flat, with no contouring whatsoever. That might sound like a bad thing, and to some it might be, but the size of the keys and the spacing between the keys make for a good typing experience. We’d have liked to have seen some more texture on the keys, but it probably won’t be too hard to become proficient enough to start touch-typing (without looking at the keys). Again, the spaces between keys provide good tactile feedback. And, speaking of tactile feedback, the keys give enough resistance to prevent typos, but give way to a meaningful finger press with a muted “click.”

The glossy black face is trimmed in a glossy black bezel, giving the handset a sleek aesthetic. But, Sprint has customized the Galaxy S Pro with a dash of pizazz by adding a metallic/chrome ring around the keyboard. The Epic 4G isn’t all glossy black plastic and metallic trim, though. The backside is coated in a slightly sparkly, matte-black finish. Sparkles and matte black don’t usually go together, we know, but trust us on this one (or just take a gander at the pics). It’s a soft-touch finish, which gives the phone a secure in-hand feel. 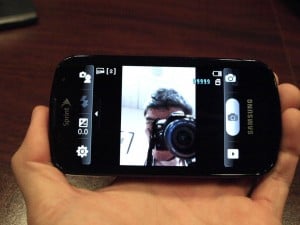 Now, if you’re like us, you have yet to power up the device. Doing so at this point (remember, power button is on the side), will boot up the Sprint variant of the Samsung Galaxy S Pro and you’ll be staring at the unlock screen. Swipe the lock icon upwards and you’re at the homescreen. What you’ll see is a Samsung customized version of Android.

Like the other Galaxy S variants already available in the US, the Android homescreen on the Epic 4G has been customized with the Samsung TouchWiz 3.0 UI. The best way to describe this Android skin is to compare it to the iPhone homescreen – apps laid out in a side-scrolling grid with an icon dock at the bottom of the homescreen that offers quick access to phone, contacts, messaging, and apps – which is not a bad thing. When you open the keyboard, the Epic 4G skips the lock screen and takes you straight to the homescreen in landscape mode. That’s right, you can view the homescreen in landscape mode – a small, but trick feature, to be sure.

If you absolutely hate all things iPhone, the UI is definitely something to consider. Unlike the iPhone, though, TouchWiz 3.0 adds quick-access toggle buttons for WiFi, GPS, Bluetooth, and 4G data connectivity in the notifications tray, which you access by dragging down on the status bar along the top of the homescreen. There’s also a little app that helps you monitor resource consumption of different apps – a handy feature for find-tuning your battery management strategy.

Overall, the Epic 4G is the gotta-have Android phone for those of you that absolutely need a keyboard. The Epic 4G is also second Sprint smartphone to support the carrier’s 4G data network (which is pretty darn fast in areas that are covered by the network), and the only Galaxy S phone to pull down real world wireless data speeds above 4Mbps. With 4G, Super AMOLED, 1Ghz Hummingbird processor, unrivaled GPU performance, and the QWERTY keyboard, the Epic 4G really is epic.

Stay tuned for our full review of the Sprint Epic 4G.