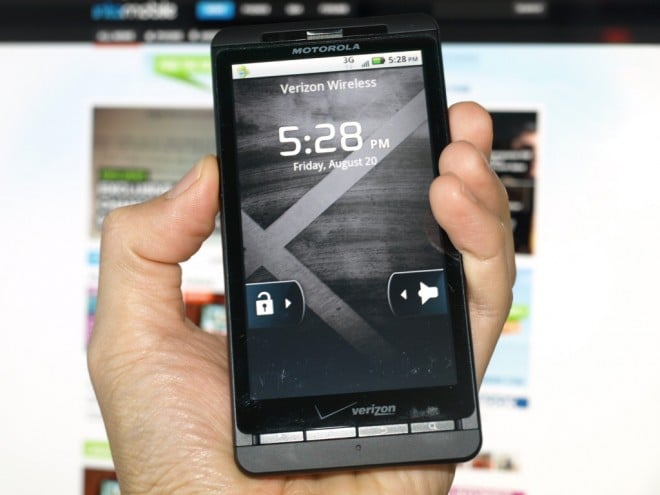 As you’ve probably heard, Android 2.2 Froyo has been leaked for the Droid X, and now pulled, but this time around, we’ve got some hands-on video and the instructions on how to install it yourself! We’ve been tricked before about the Droid X’s Froyo availability, but this is the real deal. Even if it’s not the official build, this is very much Android 2.2 Froyo.

Note: This is likely not the final build, and reverting to stock can be quite a challenge for some. If you don’t want to have to go through the task of reverting back to the stock Android ROM that Motorola shipped with the X – you’ll probably need to do so in order to get the official Froyo build once it is released – we suggest you wait it out. We won’t be showing you how to revert back. You have been warned.

You won’t find Adobe’s Flash Player in the Android Market after you install the ROM, but luckily, it’s already there for you. We’re not too sure if this will be included in the official ROM that Verizon will push out, or if the person who packaged this particular ROM simply added it in. Either way, we’re thankful! You’ll find the expected Android 2.2 enhancements within the Droid X. As long as they are compatible, you can move applications to the SD card, automatically update apps, as well as update them in bulk.

The lockscreen has undergone a few tweaks, bringing its up to speed with what we’ve seen on the Motorola Droid 2, which is nothing to get too excited for, but it may be the first noticeable difference you’ll find. The Camera application has also seen an upgrade, with the settings now on the right side of the screen. A quick tap of the screen will reveal them, and another tap will hide them. The Gallery application has also undergone an overhaul. Instead of the annoying iPhone-like photo reel, pictures are now sorted into neat piles. Unfortunately, going through pictures seems to be a little slower than before, and quality of picture thumbnails seems to have been degraded. This is one of the major issues I’ve run into so far. I took a couple of test pictures, and they were viewable in the gallery. I then went back to the camera, snapped a couple more pics, and recorded a quick video. When returning to the gallery, the new pictures and video show up, but selecting them only gives me a black screen. After trying to replicate this issue, new pictures and videos did indeed show up and played correctly. We’re going to write this off to some sort of one-time snafu.

One of changes implemented by Verizon is the addition of the VZ Navigator application to the homescreen, and I have no idea why. Not only is it an extra 10 dollars a month, you have a free navigation system built right into the Maps application. The native 3G mobile hot spot feature that comes in Froyo is missing, as expected. Verizon has their own 3G hotspot feature for $20 a month, so the move makes sense cents. Thankfully, the Notification volume on the Droid X seems to be louder, a fix that Motorola had said they were working on, and it seems to be included in the update. No longer will you worry that you’ve miss a text/email or whatnot because you didn’t hear the ringer.

The Battery Manager has also been given a couple of tweaks, and now offers a Nighttime saver mode, as well as a custom battery saver which you can completely change how the battery is used at a certain time. You can also automatically change the screen brightness when the battery goes down to a specific level. These changes might be minor, but they’re quite useful. As for speed, the Droid X flies. The smartphone was blazing fast before, and is now snappier than ever. I ran Linpack and Quadrant Standard three times each, and here are the results: Linpack: MFLOPS = Million Floating Point Operations Per Second

The Quadrant scores didn’t seems right, so after a reboot, the results read like this:

Now that’s what we were looking for. It may have taken the Droid X 5 tries to beat out the Nexus One, but it got there, and that’s what was to be expected. Although Quadrant has been deemed as less than reliable these days, it does give you a glimpse of what your device is capable of. More important than raw bench speeds, the Droid X is a bit snappier than before and performs as expected with the new Froyo update.

There’s likely more to find on the Droid X with Android 2.2 Froyo, but as far as first impressions go, we’re pretty damn impressed. Only time will tell if this ROM is indeed the official ROM or not, but we wouldn’t be surprised if we saw another one pop up as soon as tomorrow. The Droid X with Froyo has certainly stepped up its game, now let’s just hope that these devices will be able to receive Gingerbread in the future. Have you jumped into Froyo yet, or are you waiting for the real deal to hit your Droid X?