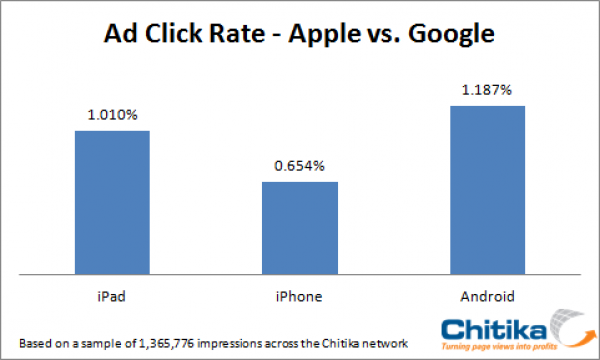 According to Chitika, an online ad network, Android users are a better target when it comes to mobile advertising than their iPhone using counterparts. How so, you ask? In a break down of iOS vs. Android ad click rates, Android users clicked on ads 81% more frequently than did iPhone users.

Even though Google’s Mobile OS is growing like wildfire, the reason for why Android owners click more ads is beyond us. The iPad was also included in the survey, and the click rate for the device more than the iPhone, yet still less than Android devices. The click rate increase for the iPad is likely due to do having that larger display, seeing as how there’s not much different between and iPad and iPhone other than screen size. But with Android devices having similar screen sizes to their iPhone counterparts, it’s interesting that the rates are so much higher.

I don’t think I’ve ever intentionally clicked an ad on any of my phones running the green robot OS, but a lot of people seem to doing just that. Ads on Android, for the most part, have the same real estate to work with as the iPhone, so I’m doubting accidental clicks have much to do with this increase. I know I’ll likely be clicking like crazy when I get my hands on the Adam, so I wouldn’t discount the extra screen size. Even with a larger installed user base, iPhone users are just too cool to click on ads, it seems. In fact, it’s possible that the iPhone user base has been trained through the years to ignore mobile ads.

Android is gaining numbers on iOS devices, in more places than one, and now advertisers know what OS to target. That said, this is just one ad network, and some may be having better luck with the iPhone and iPad.

For average consumers, will this matter much to them? Absolutely not. I’m a tech nerd, but I really couldn’t care less what OS gets more ad clicks than the another OS. But for those looking to sell ads on either platform, these numbers may just be enough to sway to you the Google side.

Gameloft is offering a new "Try Before Buy" version of their Android games for potential customers that just don't know...