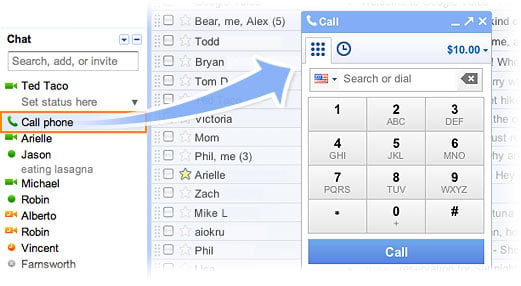 Google’s email service has today transcended beyond its initial role as a web-based email reader with the integration of Google Voice into Gmail. The Gmail inbox is already the communications hub for a large percentage of the breathing public, but today, Google is taking it to the next level. With Google Voice integration, what was once just an email inbox in your web browser has morphed into a fully-functional desktop browser-based telephone. That means you can now make and receive phone calls from your Gmail window to any phone number in the US and Canada. Gmail has certainly come a long way.

How does Google Voice for Gmail work? Well, first, you download a plugin for your desktop web browser. Then, you setup Google Voice to add your Gmail inbox as one of your GVoice phone line – this tells GV that you want the service to ring Gmail when you get an incoming phone call, in addition to ringing all your other phone numbers. If you want to make a call, simply hit up your contacts in the left sidebar and click on “Call Phone.” The person you’re calling will see your Google Voice number show up in their caller ID.

The idea behind Google Voice, as we’ve seen it in use with mobile phones so far, is that it provides you with a single phone number that you can give out to friends, family and colleagues. That single phone number is capable of ringing all your various phone lines (be they landlines or wireless phone numbers) at the same time, allowing you to take incoming phones on whichever device is most convenient for you. Now, Google is making it possible to turn your Gmail inbox into an additional line. That’s cool

The stand-out feature is the ability to take your phone calls with you on the road. Say you start a GV phone call on your desktop computer. You’re chatting with your buddy about your weekend plans but you realize that you have to hit the road to pick up some mail. Well, if you’d like, you can transfer the call to your mobile phone and continue to yammer on about how excited you two are to see Miley Cyrus in concert. That’s as cool as it gets (call transfers, not Miley Cyrus)

If you’re in the US or Canada and calling a phone number in either of these countries, you’ll be happy to hear that Google Voice will connect your call for free. If you want to make international calls, you’ll be charged at the regular GV International calling rates.

The feature should be fully rolled out to all Gmail users over the next few days, so keep an eye on your inbox for updates!

The video below should illustrate how you can put Google Voice to use from within Gmail.

Boost Mobile customers can get happy as the International Connect plan has been cut right in half. To qualify, you...