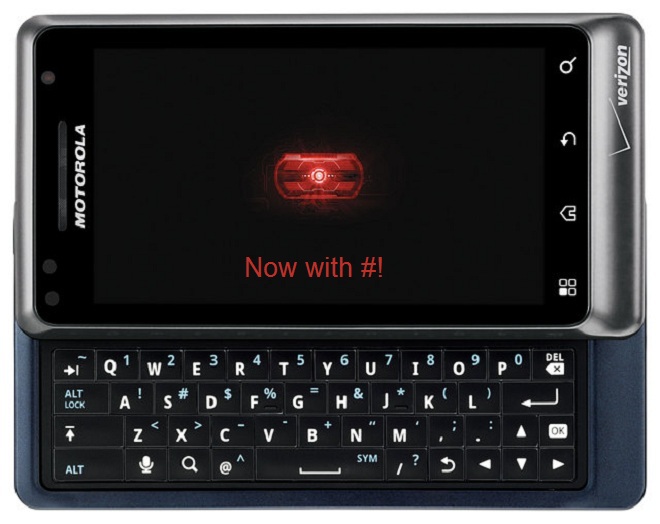 While it may not have happened prior to the release of the device, as we’ve seen before, the Motorola Droid 2 has officially been rooted (#), paving the way for custom Android ROMs to someday be available for the latest Verizon Android phone. The awesome devs over at XDA have done it yet again, only two weeks after the launch of the device.

This root method requires some ADB knowledge, but if you don’t know anything about it, there are quite a few helpful forums out there to get it up and running for you. One thing you should know before pulling the trigger is that the Droid 2 does not have a custom recovery image. This is needed to install custom ROMs, which as of now, there are none. That means you won’t be able to install any third-party Android ROMs on your rooted Droid 2. They will be on their way at some point, but right now, the main appeal to rooting the Droid 2 right now is to use root-only applications, and remove the bloatware that Verizon has thrown on the device. That said, XDA tells you to avoid removing bloatware until they can get a working custom recovery or SBF file that will allow you to restore your device, should something go awry with your shiny new Motorola smartphone.

So if you’re just looking to download a few root apps and not apply hacks to your Motorola Droid 2, you may want to consider this new root method. But, if you want to do some heavy modding to your Droid 2, we suggest that you wait it out.

If you’re the non-technical type, you should probably wait it out as well. There will likely be a one-click root solution in the future, as we’ve seen with so many other devices. I’d expect to see a Cyanogen Mod 6 ROM for the Droid 2 as well, but it’s not clear when, exactly, that ROM will be made available. While the Droid 2 will be considered a high priority device, the CM team is hard at work with a handful of other devices at the moment.

If you’re ready to take the plunge, hit up the link below. As always, doing such things to your phone can really mess it up, and possibly brick the device all together. With no real way to bring the Droid 2 back from the dead at the moment, we suggest you read the directions very carefully!

The Motorola Charm for T-Mobile is now available for your enjoyment and you can order it straight from the carrier's...