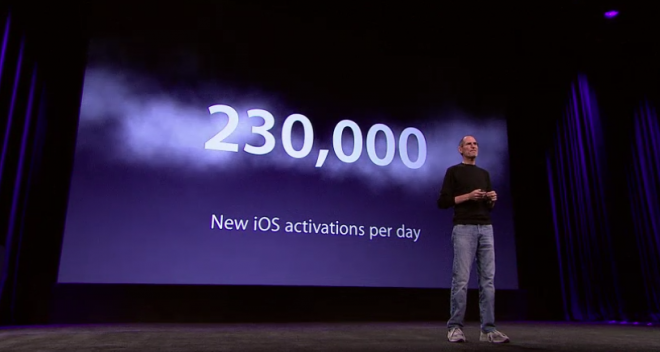 At yesterday’s iTunes / iPod event, Steve Jobs was bragging about Apple’s iOS adoption numbers, making a jab at Google for fluffing their own with with those who simply upgrade, in addition to first-time buyers. A Google spokesperson stepped in and corrected Jobs on the statement: “The Android activation numbers do not include upgrades and are, in fact, only a portion of the Android devices in the market since we only include devices that have Google services.”

This seems to imply that Apple’s assertion that 230,000 new daily iOS activations beats out the 200,000 claimed by Schmidt is wrong, as it’s not including devices launching without Google services. Both Android and iOS span more than just mobile phones, and as such, I think it’s dangerous for Apple to be bragging about their platform as a whole and taking potshots at Google, considering Android will be able to find its way onto a wider variety of hardware way more quickly than iOS will. Android tablets across a plethora of manufacturers and working the operating system onto new devices before Apple does (like TV and cars) will give it a distinct advantage in the numbers game.

Apple’s success with iOS can’t be denied, but they may have overextended their sense of dominance on this one.

A company called Enspert is joining the ever-popular tablet market with its own product - IDENTITY TAB. Launched in South...