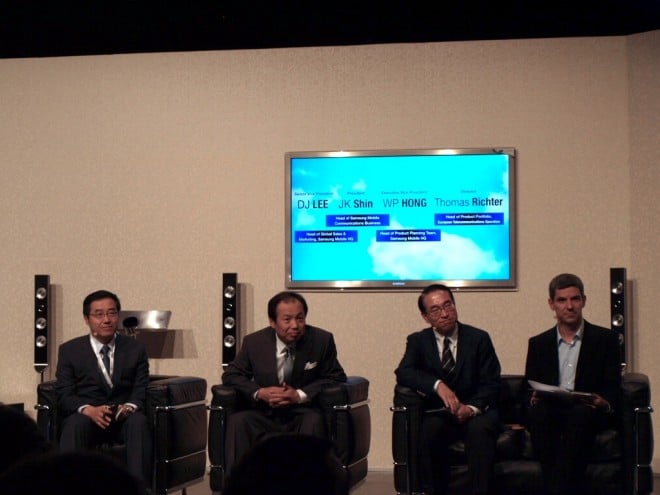 Today’s Samsung Galaxy Tab unveiling at IFA 2010 Berlin was full of exciting information about the company’s Android 2.2 Froyo tablet, but we’re also excited to hear that Samsung is already hard at work on next-generation tablets that will run on Google’s upcoming Android 3.5 Honeycomb platform. Honeycomb is expected to be the follow-up to the Android 3.0 Gingerbread OS that is due to hit tablets and other Android devices in late 2010.

At the Q&A sessions immediately following Samsung’s Tab press conference, Samsung executives took to the stage to answer some questions from the media. One of the most interesting answers we heard came from JK Shin, head of Samsung’s mobile business. In response to a question about future Android platforms being made available on the Tab, Samsung’s Head of Product Planning, WP Hong, stated that, due to business relationships with Google, the company would not comment on whether or not Android 3.5 Honeycomb would be hitting the Tab or future Samsung tablets. However, JK Shin took it upon himself to set the record straight. According to Mr. Shin, Samsung will have a more diverse Android tablet portfolio next year. Better yet, Mr. Shin confirmed that Android 3.5 Honeycomb will indeed be powering the next-generation of Samsung Galaxy Tab tablets.

Samsung has also confirmed that an update to Android 3.0 Gingerbread will be made available for the Tab in the future.

So, there you have it. While the world has yet to get a real taste for the Galaxy Tab in its current, Android 2.2 Froyo-powered form, Samsung is already working to bring to market new Tab devices that will be powered by Honeycomb. It’s not clear when in 2011 we’ll see Honeycomb-powered tablets, but we’re not expecting to see them anytime soon. If anything, Samsung tablets running Androi 3.5 will launch in late 2011, given the Galaxy Tab’s current Q4 launch window.