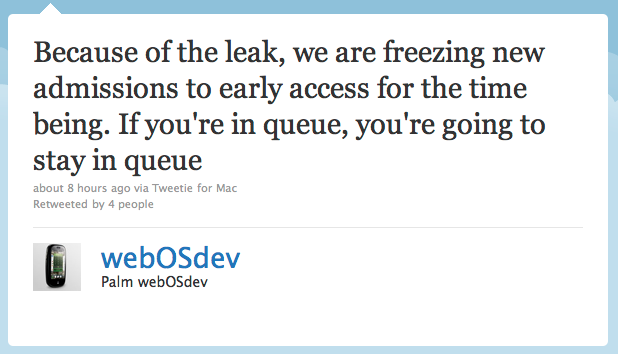 A beta build of webOS 2.0 was distributed to developers earlier this week and the underlying codebase has yielded up a reference to a virtual keyboard. Those that do not follow webOS may not realize that the mobile OS lacks a virtual keyboard. A virtual keyboard is not necessary on the webOS platform as all current Palm devices, the Pre, Pixi, and their Plus variants, include a physical keyboard.

With Palm and HP planning a webOS tablet, a virtual keyboard now moves from being an added feature enthusiasts added on via Preware to necessary component of this mobile OS. Though Palm did not announce support for a virtual keyboard when it rolled out the webOS 2.0 beta to developers, a quick scan of the underlying code reveals a reference to a virtual keyboard, the second time a keyboard has been spotted in webOS code.

In this latest leak, a subsection of the code includes the parameter VirtualKeyboardEnabled=False. Changing the value to True has no effect right now but its mere presence shows that Palm is building a virtual keyboard and, with any luck, this keyboard will debut on the rumored webOS tablet as well as any future smartphones.

While Apple, HTC, and others are accustomed to individuals poking and prodding new firmware and OS builds, Palm apparently is not. The Sunnyvale, California company has temporarily shut down its early access program for developers and is no longer processing new admissions. If you are already approved for this program, then you are golden. If you recently applied and are pending approval, your wait may be lengthy as Palm takes time to consider a revision to  its open policy. As soon as Palm has the appropriate restrictions in place, it will being approving new developers.

Now if Apple and HTC can tolerate a few minor leaks to get the latest build into the hands of developers, shouldn’t Palm look at their example and be doing the same? Isn’t shutting down access to the developer program a bit of a buzzkill for new and enthusiastic developers who may be interested in the latest webOS has to offer? With the Apple and Android app stores growing at amazing rates, shouldn’t Palm be doing everything possible to get additional developers on board, regardless of the potential for a few minor leaks? Your thoughts and opinions on this highly controversial matter are welcome in the comments.

Verizon Prepaid Data Plans Get Official on BlackBerry, Android, Palm and Others

After some pretty heft hints earlier this week, Verizon prepaid plans have gone live on a wide variety of handsets....